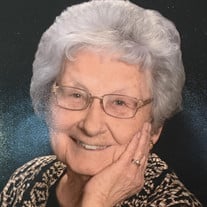 Louise Marie was born to Anna (Engelken) and John Henry Lohmann on November 24, 1932 in Alva, OK. She was baptized at Zion Lutheran Church on December 4, 1932. Louise was confirmed by Otto Hoyer on April 14, 1946. On June 3, 2019 she passed away at the age of 86 years, 6 months and 10 days. She attended the Lutheran School. Louise held several offices in Walther League where she met her husband, Glenn. Louise worked at the Coury’s East Side grocery and then worked at the City of Alva water department. She married Glenn Ray Schoeling on November 21, 1954. They were blessed with four children, Gary, Dennis, Glenda and Sharon. After the kids were born Glenn and Louise worked side by side raising Charolais cattle and farming. Louise was very active in the community as a 4-H and FFA leader. She was a member of the household executives. In the Lutheran Church she was a Sunday School and Vacation Bible School teacher and her biggest passion was LWML (Lutheran Women’s Missionary League) where she served as Zone President and was very active in the local society. Louise’s hobbies were crafting, sewing (making quilts), and gardening. Besides her parents, she was preceded in death by three brothers, Walter, Edmund (12 years old), Edmund and a sister Helen. She is survived by her husband Glenn of the home, Gary (Beth) Schoeling of Alva; Dennis Schoeling of Alva; Glenda (Eric) Armintrout of Peculiar, MO; Sharon (Kevin) Brewer of Watonga, OK. Five grandchildren Maggie Schoeling of Grapevine, TX; Morgan (Brandon) Stupka of McPherson, KS; Kyle Schoeling of Alva, Dalton (Sarah) Brewer of Fay, OK; Shelby (Mark) Cameron of Dover, OK; five great-grandkids, Drace Stupka, Demory Stupka, Colson Brewer, to be born baby Stupka and baby Brewer; many nieces, nephews, other relatives and friends. In lieu of flowers, Memorial Contributions may be made in her memory to Zion Lutheran Church or LWML (Lutheran Women’s Missionary League) through Wharton Funeral Chapel.

The family of Louise Schoeling created this Life Tributes page to make it easy to share your memories.

Send flowers to the Schoeling family.