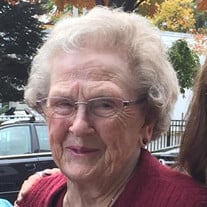 Family Visitation, Monday November 13, 2017 From 6:30 to 8:00 P.M. at Wharton Funeral Chapel Services with be at 11:00 A.M. on Tuesday November 14, 2017 at the First United Methodist Church in Alva, OK with Graveside following At the Alva Municipal Cemetery. Lorraine Malzahn passed away November 10, 2017 at the age of 87 years 7 months and 12 days. Lorraine Malzahn was born on a farm north of Dacoma, Oklahoma on March 29, 1930 to Lucille and Nels Nelson. She had one brother, Ronald Nelson. Lorraine attended Washington Elementary, Alva Jr. High and Alva High School. She attended Northwestern State University before Marrying Paul Malzahn. Lorraine Nelson and Paul Malzahn were united in marriage on October 9, 1949 in Alva, Oklahoma. Of this union of marriage their children are: Paula, Nels and Kyle. Paul and Lorraine traveled throughout the United States and the world with Paul�s work. They lived in New Orleans for 20 plus years where Lorraine owned a Hallmark Cards and Gifts store which she truly loved. Stationary and cards were her passion, as many of you know, as she never forgot a birthday. Upon moving back to Alva, Lorraine worked at Holder Drug for eight years, where she was in charge of the greeting cards. Lorraine was preceded in death by her husband Paul, her parents Nels and Lucille Nelson and Brother Ronald Nelson. She is survived by her four children: Paula and Husband Gary Hutchins of Round Rock, TX, Her two sons Nels Malzahn of Dallas, Tx, Kyle and wife Teresa Malzahn of Edmond, Oklahoma, and her considered son Ric Barnes of Issaquah, WA. Eight grandchildren Hannah Malzahn of New Haven, CT, Dane Malzahn of Edmond, OK, Tyler and wife Amanda May of Liberty Hill, TX, Travis and wife Ashley Hutchins of Houston, TX, Nels and Christina Malzahn of Atlantic Beach, FL. Morgan and husband Chad Guerney of Clarkdale, AZ, Taylor and Jaret Thomas of Bloomfield Hills, MI, and Nick Malzahn of Rochester Hills, MI. Six Great-Grandchildren, Liam, Graeme, Rhys Guerney, Evie Hutchins, and Lucia Marie Malzahn. Taylor and Layton May. Sister-in-law Shirley Nelson of Kiowa, KS, and Forrest Nelson of Alva, OK, and many other cousins, family and friends. In Lieu of Flowers all Memorial Contributions can be made to the First United Methodist Church.

Family Visitation, Monday November 13, 2017 From 6:30 to 8:00 P.M. at Wharton Funeral Chapel Services with be at 11:00 A.M. on Tuesday November 14, 2017 at the First United Methodist Church in Alva, OK with Graveside following At the Alva... View Obituary & Service Information

The family of Lorraine Malzahn created this Life Tributes page to make it easy to share your memories.

Send flowers to the Malzahn family.