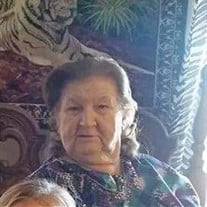 Private Family Services Lorna De Hunt, daughter of Deliah (Rink) and John Phillips was born in Alva on June 26, 1938. She passed away at her home in Fairview, OK on January 7, 2016, at the age of 77 years, 6 months and 12 days. She attended... View Obituary & Service Information

The family of Lorna Hunt created this Life Tributes page to make it easy to share your memories.

Send flowers to the Hunt family.