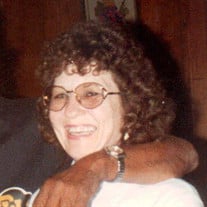 Family Visitation: Friday, May 8, 2020 from 6:00 to 7:30 PM we need to limit the number of people to 10, please be respectful Graveside Services:Saturday, May 9, 2020 at 2:00 PM those attending may stay in their car's and turn their radios to FM 104.9 Loretta Mae, daughter of Dorothy Freda (Miller) and Cecil Wayne Murrow was born in Alva, Oklahoma on November 17, 1944. She passed away in Enid Oklahoma at the age of 75 years 5 months and 18 days. Growing up in the Cora Area, and attending a one room schoolhouse, Northwest of Alva, she graduated from Alva High School with the Class of 62. Miss Murrow, was married to Larry James in Alva at his mother’s house in 62. To this union three children were born Terri, Heidi and Larry. She worked at The Golden Crust bakery and at Wal-Mart as a secretary/bookkeeper. Loretta, married Wayne Donald Bails on November 29, 1974 in Alva Oklahoma. They made their home in Alva where she helped raise their three children. She was preceded in death by her parents, Wayne in 1994 and two brothers John Lee, in 1949 and Phil Murrow. Loretta is survived by her two daughters and their spouses, Terri and Bill Ahlum of Holly Springs, Mississippi and Heidi James of Alva, a son and his wife Larry and Dianna James of Seminole, Oklahoma. She is also survived by Seven grandchildren, Katrina, William and James, Gayle, Dustin, Madison and Toby and twelve great grandchildren. Two sisters, Coetta Glenn and Diane Whisman. Three brothers, Dale, Max and Russell. A number of nieces and nephews and other relatives and friends. Contributions may be made in her memory to The Oklahoma Medical Research Foundation (OMRF) for cancer(https://omrf.org/about-omrf/research-targets/cancer/) or through Wharton Funeral Chapel.

Family Visitation: Friday, May 8, 2020 from 6:00 to 7:30 PM we need to limit the number of people to 10, please be respectful Graveside Services:Saturday, May 9, 2020 at 2:00 PM those attending may stay in their car's and turn their radios... View Obituary & Service Information

The family of Loretta Mae Bails created this Life Tributes page to make it easy to share your memories.

Send flowers to the Bails family.