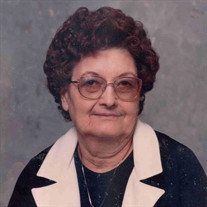 Lola Mae went to be with her Lord on October 29, 2019, at the age of 89 years 3 months and 9 days. She was born on July 20, 1930, to Pauline (Demoss) and Fenton Hoskins in Wilmore, Kansas, the oldest of nine children. After Lola’s mother died a tragic death when Lola was a tiny baby, she was primarily raised by her grandparents, Dan and Myrtle Hoskins, at Lookout, Oklahoma until her father remarried. Lola attended Center view School through eighth grade. On October 9, 1946, Lola and Gerald Silby (Jack) were united in marriage. The couple was soon blessed with four children. During their time in Freedom, Oklahoma Lola worked as a cook at the Cattlemen’s Café and the school cafeteria. In 1967 the family moved to Alex, Oklahoma but returned to Freedom in 1969. Besides being a fantastic cook, Lola served with compassion as a CMA at the Mooreland and Share Convalescent Homes until her retirement in 1997. Lola loved to write poetry and short stories and dreamed of being published and many of her poems and stories were published in the Freedom Call. She was also excellent at needlework and blessed her grandchildren with beautiful baby blankets. Lola was preceded in death by her parents, husband Jack, daughter-in-law Diana Smith, sister-in-law Alice Snovelle, and brother Lonnie Hoskins. She is survived by one brother, Randy Hoskins, of Plymouth, Indiana; sisters Ruth Hayes, and companion Albert, Judy Abendroth and her husband Paul, Betty Hawkins and husband Denny, all of Burlington, KS, Lois Walsh and husband Dewayne of Kansas City, MO, Mary Lou Shidler and husband Richard of Argos, Indiana; sister-in-law Roseanne Hoskins and brother-in-law Raymond Snovelle of Burlington, KS. Lola is also survived by all of her children; Kenneth Smith and wife Cynda of Coffeyville, KS; Dennis Smith of Burlington, KS; Jackie Sherrell and husband Tim from Alva, OK; Ted Smith and wife Georgia of Bristow, OK; ten grandchildren and twenty three great grandchildren Memorial Contributions may be made in her memory to Assembly of God

The family of Lola Mae Smith created this Life Tributes page to make it easy to share your memories.