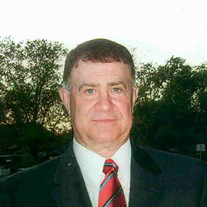 Leslie Allan Kamas, age 73, passed away peacefully at Integris Baptist hospital on May 25th, 2019. The son of Lewis and Darlien Kamas, Les was born on March 26, 1946 at the Freedom Clinic and Hospital. He was baptized as a small child and attended the Freedom Christian Church. He was a graduate of Freedom High School and Northwestern Oklahoma State University. After obtaining a degree in Education, Les pursued a career in teaching and coaching. He held positions at Tyrone, Carmen Dacoma, and Kingfisher Public Schools. During his time as an educator, he met and impacted the lives of many young men and women. He established a great connection with many of his students and remained in touch with a number of them over the course of his life. He retired from teaching and coaching in 1979 and opted to return to his hometown of Freedom, Oklahoma. It was here that he started his family with his wife Jimalou Perdue and went to work alongside his father at the Kamas Ranch. Les loved his hometown and family's ranch deeply. He continued working as a rancher up until his last days and cherished the time he spent there with his father and three sons more than anything. In July of 2012, Les married Sandra Harmon. They enjoyed many experiences together, but especially loved their adventures to destinations such as Branson, Angel Fire, and Puerto Vallarta. Early in his life, Les was also honored to serve his country as a member of the Oklahoma National Guard. Later in life, he continued his acts of service through his work as a commissioner on the Oklahoma Water Resources Board. Les was many things to many people. A friend, a teacher, a coach, a member of the Oklahoma Eight Man Football Hall of Fame, a rancher, a man with a passion for conversation, and a champion of his beloved hometown. But more importantly, he was a faithful son, a loving father and grandfather, a cherished brother, and a caring husband. He was a big man with a big heart and a bigger presence. He will be greatly missed by all that knew him. Les is survived by his mother, Darlien Kamas of Freedom; his wife Sandy Kamas of Freedom; his son Laremy Kamas and his wife Pepper of Kingfisher; his son Lathen Kamas and his wife Kian of Tulsa; his son Lake Kamas of Kingfisher; his three granddaughters, Maddi, Hadley, and Chloe Kamas of Kingfisher; his grandson Leith Kamas of Tulsa; his sister Carol Kamas Rooney of Oklahoma City; his nephew Kamas Rooney and his wife Carlye of Lakeville, MN; and his great nieces Olivia and Elise of Lakeville, MN. He is also survived by his step-daughter, Nikki Steggs and husband Garret; their children, Kye, Sloan and Walker all of Edmond; and many other loved ones and friends. Les was preceded in death by his father Lewis Kamas and his step-son Brandon Harmon. For those who wish to honor Les's memory, his family asks that in lieu of flowers you support the Freedom Oklahoma Ambulance and Volunteer Firefighters, the Freedom Museum, or a charity of your choice.

Leslie Allan Kamas, age 73, passed away peacefully at Integris Baptist hospital on May 25th, 2019. The son of Lewis and Darlien Kamas, Les was born on March 26, 1946 at the Freedom Clinic and Hospital. He was baptized as a small child and attended... View Obituary & Service Information

The family of Leslie Allan Kamas created this Life Tributes page to make it easy to share your memories.

Send flowers to the Kamas family.