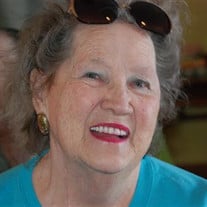 Memorial Services are pending Leona Marie �Nonie� was born to Margaret Elizabeth (Brockman) and Leo Augustine Jones in Alva, OK on June 28, 1935 at Alva General Hospital. She passed away on January 13, 2016 at Share Medical Center in Alva. Leona attended grade school at the Sacred Heart Catholic Schools and then attended Alva High School and graduated with the class of 1954. After high school, Leona worked for the Bell Telephone company for several years. Leona also graduated from Enid Beauty College and worked as a beautician in her mother�s Powder Puff Beauty Shop. Leona was married to Wayne Young in 1972, and worked for years alongside her husband in their plumbing business in Alva, Oregon, Colorado, Oklahoma City, and later on in Purcell. Leona was also a seamstress for several large manufacturing companies in Oklahoma. She took great pride in her sewing skills. Even though they had no children of their own, Leona welcomed Wayne�s sons, Bob , Duane, and Rick as her own. Leona loved spending time with her family and enjoyed traveling, including a wonderful trip to Australia with Bob and Marilyn just a few years ago. Nonie will be missed by all. Leona is survived by her stepsons, Bob (Marilyn)Young of California and, grandsons Bret Young and Chad (Jennifer)Young and their children Nathan, Dylan, Wyatt and Katelyn, two sisters Patricia Graves and Bunny (Don) Pfeiffer, one brother, John Williams, and many nieces, nephews, cousins, and other relatives and friends. She is preceded in death by her husband, mother, father, step father and brother-in-law, Bob Graves.

The family of Leona M. Young created this Life Tributes page to make it easy to share your memories.

Leona Marie �Nonie� was born to...

Send flowers to the Young family.