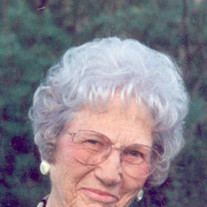 Leola Pearl, daughter of Leah (Rodgers) and Andrew Jackson Holt was born January 26, 1918 in Carmen, Oklahoma. She passed away at the Beadles Nursing Home on the 13th of July at the age of 92 years, 5 months and 17 days. She attended the Alva School System where she graduated from High School. On September 20, 1938 she was married to Raymond Walter Rhodes in Cherokee, Oklahoma. To their marriage Roger and Andrew were born. After their marriage they lived and farmed in the Hardtner, Kansas area then moved to Alva where they operated their own mechanic shop and gas station. In 1961 they purchased Alva Body and Fender. In 1969 started Rhodes Auto Salvage where she was Book Keeper for 48 years. She was a member of the Barnes Street Church of Christ. She is preceded in death by her husband, Raymond on February 6, 2005; her parents, an infant sister, two sisters and their husbands: Ethel and John Lakely, Velma and Harry Rhodes and two brothers and their wives: Clifford and Pauline Holt and Alfred and Lucille Holt and two brothers in law Rosco Rhodes and Leonard Spencer. Leola is survived by her, two sons and their wives: Roger and Gloria, Andrew and Donna all of Alva, six grandchildren and their spouses: Colette and Charles Hayden of Alva, Christine and Derrick Harris of Enid, Randall and Lari Rhodes of Alva, Lisa Melton of Alva, Tammie and Brian Gaddy of Alva, Matthew and Lindsey Rhodes of Norman, Eleven great grandchildren: Roger and Charles Hayden, Devan and Jordon Harris, Rayden, Ryland and Rhett Rhodes, Constance and Jacquelyn Melton, Landry and Lakin Gaddy. Three sisters: Freda Rhodes, Verda Murrow, and Hazel Spencer, two sisters in law: Bernetta Warehime and Lula Belle Watkins, a number of nieces, nephews, other relatives and friends. PDF Printable Version

Leola Pearl, daughter of Leah (Rodgers) and Andrew Jackson Holt was born January 26, 1918 in Carmen, Oklahoma. She passed away at the Beadles Nursing Home on the 13th of July at the age of 92 years, 5 months and 17 days. She attended the Alva... View Obituary & Service Information

The family of Leola Pearl Rhodes created this Life Tributes page to make it easy to share your memories.