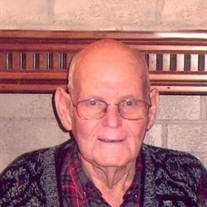 Leo Lonnie, son of Mae (Tomlin) and Lloyd Gilbert West was born May 31, 1928 at Fay, Oklahoma. He passed away at the Alva Share Medical Center on the 30th of April at the age of 82 years, 10 months and 29 days. He attended the Garden Valley rural grade school near Fay, Oklahoma. When he was in the 5th grade they moved to Eagle City where he graduated with the class of 1945. On February 17, 1951 he joined the United States Army serving during the Korean Conflict and was honorably discharged February 3, 1953. Leo was married to Shirley Ann Pruitt in Purcell, Oklahoma on March 6, 1956. To their marriage two daughters, Charlotte and Annette were born. Shirley passed away March 1, 1995. On May 25, 2000 Leo was married to Janene Delores Pfleider at Elm Grove. Following their marriage they made their home in Alva. Janene passed away November 12, 2010. Mr. West was preceded in death by a daughter Annette Lynn, a son-in-law Tom Coffey, his parents, two sisters; Wyonna West and Pauline LaVerne Shoemaker and two brothers; Benard Wayne And Ira Lester. Leo is survived by a daughter Charlotte Coffey of Crescent, Oklahoma and five grandchildren, Terra and Chris Brown of Cushing, Oklahoma, J.R. and Jaye Blevins, Lonnie Blevins, Ryan Findley all of Crescent, Oklahoma and Nathan West of Cushing; Five great grandchildren, Courtney Blevins, Dixie Blevins, Payton Blevins, Lonnie Blevins Jr., Avaleigh Brown, with two more on the way Dalton Brown and Triston Blevins. Two step-daughters and their husband, Joni and Bill Foreman, of Casper, Wyoming and Toni and Greg Bender, of Kingfisher, Oklahoma; a step-son and his wife, Mike and Dannel Pfleider, of Alva. Nine step-grandchildren and their spouses; Zeb and Andrea Lyon, Ray Lyon, Daryl Foreman, Jillian Foreman, Derek and Katherine Foreman, Laci and Brian Kavanagh, B.J. and Kari Bender, Clint and Evie Pfleider and Kyle and Sammi Pfleider; nine step-great grandchildren; a brother and his wife, Bill and Helen West and a brother -in-law and his wife Dale and Della Dunnigan. PDF Printable Version

Leo Lonnie, son of Mae (Tomlin) and Lloyd Gilbert West was born May 31, 1928 at Fay, Oklahoma. He passed away at the Alva Share Medical Center on the 30th of April at the age of 82 years, 10 months and 29 days. He attended the Garden Valley... View Obituary & Service Information

The family of Leo L West created this Life Tributes page to make it easy to share your memories.

Send flowers to the West family.