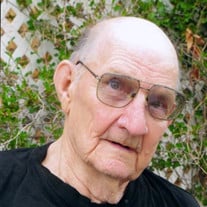 Leland Finis Morris was born January 6, 1935 to Lela (Hardy) and Finis Morris on the family farm located NW of Capron, Oklahoma. Leland joined the family as the fourth child, the only boy of five children. Virginia, M�Arlene, Joan, Leland, and Mary Lou lived with their parents at the family farm until they moved to the town of Capron right across from the school. Leland attended Capron School first through twelve grade graduating in 1952. Leland played basketball for Capron and was a member of the FFA. After high school he joined the National Guard, 189 Arty, with his buddy Bob Warfield and served for 5 years. Leland married Maryona Cushenbery on October 31st, 1959 in Alva, Ok where they lived in the Capron and Alva areas. They adopted their daughter Kathy Lynee who was born January 18, 1971. They adopted their second child, a son, Chris Alan who was born July 16, 1974. Leland and his family moved to Alva when their kids started school and resided there until his death. Leland farmed with the help of Chris and Maryona until they sold the farm in 2006. Leland was a farmer and also worked as an auto body mechanic at K&K for approx 30 years, which helped to keep the farm going. He got his passion for working on cars from his dad, who owned a mechanic shop in Capron. Leland loved to build vehicles from pieces of other vehicles and always had a project or two going on. Leland and Maryona have 4 grandchildren, Quincy Reynolds (15), Mackenzie Morris (12), Kashton Reynolds (11), and Mitchell Morris (10). His grandchildren were the highlight of his life. He loved having them around and loved to tell stories about his time spent with them. When they were all playing and being noisy he would laugh and say, through a worn out smile, �Well, I guess it�s a good thing they are healthy enough to run & play.� Leland was preceded in death by his mother and father, two sisters, M�Arlene Hendrickson and Joan Rowland, and two nephews. He is survived by his wife Maryona of the home, his daughter and son in law Kathy and Quentin Reynolds of Gillette, WY, his son and daughter in law Chris and Shannon Morris of Alva, OK, four grandchildren, sister and brother-in-law: Virgina & Edgar Schwerdtfeger of Capron and sister and brother-in-law: Mary Lou and Bob Shoemaker of Lubbock, TX., and many other relatives and friends. Memorials may be made to Beadles Rest Home through Wharton Funeral Chapel.

The family of Leland Finis Morris created this Life Tributes page to make it easy to share your memories.

Send flowers to the Morris family.