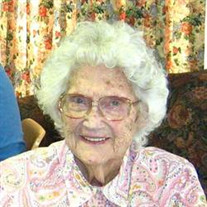 Lela Augusta, daughter of Bessie Margaret (Lewis) and William T Beadles, was born around Alva on May 22, 1912. She passed away at the Alva Share Medical Center on the 23rd of December at the age of 97 years, 7 months and 1 day. She attended the Alva School System. On August 18, 1929 Miss Beadles was married to Clyde Rader in Alva, Oklahoma. To their marriage three children, twins Margaret and Mary Ann and Thelma were born; three step children Clyde (Bill), Leonard, and Ada. Following their marriage Gussie worked with Clyde at the Whitehorse gas station and convenience store and blacksmith while farming. During WWII the family worked the farm while all the men went to war. In 1945 she went to work at Beadles Nursing Home as a nurses aid; driving back and forth to Whitehorse. At the age of 50 she went back to school and received her LPN in 1962. Later she went to school to be an administrator for the nursing home. In 1965 the family moved to Alva. Mrs. Rader was a member of the Alva Church of the Nazarene. Gussie taught Sunday school, was on the church board and received a Distinguished Service Award for the most years of service at the church. She enjoyed making comforter quilts for the nursing home until she was injured in June. Mrs. Rader continued to sew until her death. Gussie was preceded in death by her husband; Clyde, two daughters; Mary Ann passed away at birth, Margaret, three step children; Bill, Leonard and Ada Lawson and her parents. She is survived by her daughter, Thelma Curry; thirteen grandchildren, LeRoy, Doris, Ernest, Barbara, Dolores, Glenda, Ronnie, Vernon, Dr. Mary Lee Collings, Sherrie, Eugene and Gail; numerous great grandchildren; two great great grandchildren; a sister, Ruth Hiett, a daughter- in law, Olive Rader and several nieces, nephews, other relatives and friends. PDF Printable Version

Lela Augusta, daughter of Bessie Margaret (Lewis) and William T Beadles, was born around Alva on May 22, 1912. She passed away at the Alva Share Medical Center on the 23rd of December at the age of 97 years, 7 months and 1 day. She attended... View Obituary & Service Information

The family of Lela (Gussie) Augusta Rader created this Life Tributes page to make it easy to share your memories.