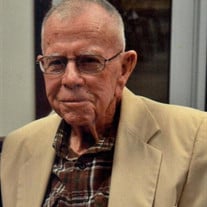 Leroy (Lee) Haley, son of Mary and J.W. Haley was born on December 9, 1926 at Dacoma, Oklahoma, and passed away in Alva, Oklahoma on February 21, 2017 at the age of 90 yrs, 2 months and 12 days. Lee attended Carmen Public Schools and N.W.O.S.U., where he received his Bachelors Degree in 1953 and his Masters Degree in 1959. While at NWOSU, Lee was Vice-President of the Student Council in 1950-51. Lee attended O.S.U. for Advanced Graduate Work. Lee taught at Washington Elementary School, Alva, Oklahoma, for five years before going to Longfellow Elementary for thirty years as principal. Besides teaching, he enjoyed farming, and was a football and basketball official for twenty-five years. Lee was in W.W.II, going into Nagasaki, Japan soon after the 2nd atomic bomb was dropped there in 1945. He was a S/Sgt. in the 22nd Special Service Co. Lee and Mary Shoemake were married in Kingfisher, Oklahoma on March 29, 1951. There were no children to this union. In the early 1950’s, Lee and Mary put in the first stock car race track in Alva, Ok. The track was located at what is now the Woods County Fairground. Lee and Mary also had an antique business in Alva. Lee especially liked the antique cars and early National Cash Registers. Lee served on the Woods Co Health Board for several years. He also served on the Advisory Board of the N.W. Vo-Tech in Alva. In 2012, he was awarded the Outstanding Education Award from NWOSU. Lee was honored as an Inaugural Distinguished Gold Bug in 2015. He attended the College Hill Church of Christ. Lee was baptized when he was seventeen in the First Christian Church of Carmen, Oklahoma. Lee was preceded in death by his parents and a brother, Nelson Haley, and many other relatives. He is survived by his wife, Mary Haley, nephews, and nieces. Memorials in his name may be made to: The Alva Educational Foundation, c/o Wharton Funeral Chapel, 1302 Oklahoma Blvd, Alva, OK 73717

The family of Lee R Haley created this Life Tributes page to make it easy to share your memories.

Leroy (Lee) Haley, son of Mary and J.W. Haley was born on December...

Send flowers to the Haley family.