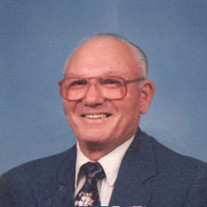 Bud Kilmer was born on June 9, 1919 to Melvin and Rose Kilmer at their home 12 miles West of Alva, Oklahoma on Highway 64. Bud is survived by his two sons and one daughter, and their spouses: Don E. Kilmer of Yukon, OK; Dean and Karen Kilmer of Waxahachie, TX; and Kay Ann and Jeff Lemen of Oklahoma City, OK; three grandchildren and their spouses, Scott and Wendy Kilmer, Keith and Michelle Kilmer, and Jonathan and Kelly Jordan, and seven great grandchildren. Bud was preceded in death by his wife, Virginia M. Kilmer; both his parents; seven brothers Marvin, Floyd, Jack, Harold, Ralph, T.J., and Russell, and three sisters, Goldie, Dots, and Avis. On February 8, 1942 he was married to Virginia Margaret Andrews while on a weekend leave from the Army. They made their home in Alva, Oklahoma. Bud and Virginia were married for more than 61 years before Virginia’s passing in 2003. Bud attended grade school at the Cora community building, and at the Mount Vernon schoolhouse. After the eighth grade he went to Alva Senior High and graduated in 1939. Bud attended one year of college at Northwestern in Alva. Bud served in the Army for a total of eight years active duty and saw lots of combat in Europe during World War II, including the invasion of the Island of Sicily, the beach head landings at Anzio and Solorano to eventually retake Italy, the liberation of France, and finally the 45th Division fought its way to Dakow Germany where they freed over 17,000 concentration camp prisoners and buried more than 30,000 that had been put to death in the gas chambers. After World War II, Bud served the Oklahoma Army National Guard for over 20 years. While in the Guard, he was called into active duty during the Korean Conflict. He retired from his Army service as a Captain and the Battery Commander of the 189th Field Artillery in Alva, Oklahoma. On June 1, 1947, Bud was hired by Oklahoma Gas & Electric Company to be a lineman. After several years of climbing poles and stringing wire, Bud was promoted to Line Foreman B Class. During his 35 years of work with OG&E, his line crew rebuilt the electric circuits for the cities of Alva, Wakita, Aline, and Helena, in addition to assisting on most line services required for areas located in Northwestern Oklahoma. Bud was very proud of the crew’s safety record as they had only one day of lost service, due to an accident, in the 35 years that he worked for OG&E. Bud retired from OG&E in 1982 after having a heart attack requiring a triple by-pass. After returning from the Korean Conflict, Bud became an active member of the Church of Christ. He helped build the two different Church buildings that the congregation has used in Alva. Bud also served as an Elder in the Church for ten years before resigning in 1984 due to his health conditions. For the next 16 years Bud and Virginia Kilmer became active in Christian works to help small congregations throughout the United States, but principally in the Southwest Region. Bud and Virginia helped start a group, the “So Journers”, which are a group of Christian couples who travel together in teams of four or five couples and visit congregations requesting assistance throughout the Nation. Bud would often teach Bible classes, knock doors to invite people to church, and always do handyman repairs on any project that a congregation would need. These 16 years were some of the best times for Bud and Virginia, as they got to travel and work together doing the Lord’s service. It was very satisfying and gratifying to both of them. In late 1999, Virginia became ill, and Bud moved them to the Oklahoma City area in order to have more immediate health care. For the last 10 years of his life, Bud has spent his time caring for the elderly that are sick or no longer able to physically help themselves. In the Assisted Living Facility, you could always find him either pushing someone in a wheel chair or picking up something for another person that was unable to pick it up themselves. Bud became a favorite to the residents as well as the local staff members, because he was always pleasant and tried to help everyone. Dad, this world will miss you as we will, but we know that you are with the Lord and reunited with Mother. Love you lots and thank you for being our earthly Father. PDF Printable Version

Bud Kilmer was born on June 9, 1919 to Melvin and Rose Kilmer at their home 12 miles West of Alva, Oklahoma on Highway 64. Bud is survived by his two sons and one daughter, and their spouses: Don E. Kilmer of Yukon, OK; Dean and Karen Kilmer... View Obituary & Service Information

The family of Lauren E. Kilmer created this Life Tributes page to make it easy to share your memories.

Send flowers to the Kilmer family.