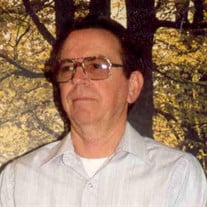 Our beloved Daddy and Grandpa (Bampa), Larry Dean Roberts, passed away suddenly and peacefully in his home on December 14, 2019; he was 80 years old. Larry grew up on his families’ farm north of Capron, OK. After graduating Capron High School Larry joined the Navy in the late 1950’s and served on the USS Everglades (a Destroyer Tender) as a Machinist Mate. Upon his return to Oklahoma (Alva) he attended Northwestern Oklahoma State University, where he met his one true love, Margarett Louise Cotter (from Buffalo, OK). They were married on January 21, 1965. Larry started working at Savere Refrigeration where he later became a partner and owner. After working and serving the community for 45 years he decided it was time to retire and start traveling. Larry is proceeded in death by his parents, brothers Donald, John, and Howard Roberts, sisters Elaine Lattimer, Betty Langton, and Bonnie Ludlum, as well as his loving wife, Margarett Louise (Cotter) Roberts. Larry is survived by his sister, Peggy Stanford of Enid, OK, his son, Glenn Dean Roberts, daughter Sharon Denise (Roberts) Cox, her husband Jason W. Cox, and grandchildren Christopher Quinn Cox, Danielle Marie Cox, Mikayla Danae Cox, Zachary Dylan Cox of The Woodlands, TX, Charles Dean Roberts and his wife Haley of Covington, LA, and Alyxanna Roberts of Hammond, LA. Larry will be remembered for his steadfast devotion and love of his family, as well as his willingness to help others. He loved to travel in his RV to sight see and visit family. He loved working with wood and usually could be found in his woodshop (barn) busily crafting projects for family or friends. In lieu of flowers, memorial contributions can be made to the American Cancer Society, Myasthenia Gravis Foundation of America, or Dysautonomia International.

Our beloved Daddy and Grandpa (Bampa), Larry Dean Roberts, passed away suddenly and peacefully in his home on December 14, 2019; he was 80 years old. Larry grew up on his families&#8217; farm north of Capron, OK. After graduating Capron High... View Obituary & Service Information

The family of Larry Dean Roberts created this Life Tributes page to make it easy to share your memories.

Send flowers to the Roberts family.