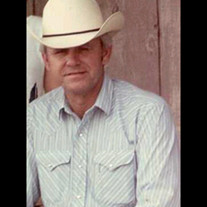 Larry Gene son of, Lillian Emma (Gerloff) and Lewis Joe Devine was born on January 9, 1943 in Freedom. He passed away at his home on the 3rd day of August at the age of 68 years, 6 months and 5 days. He attended the Freedom Public School through the 8th grade and Ponca City Military Academy where he excelled in sports and academics and graduated at the top of his class as a First Lieutenant in 1961. He returned to Freedom and farmed and ranched with his father, Lewis, and leased his own land as well. Larry was married to Judy Kay Fender on February 27, 1965 at the Alva First Baptist Church. To their marriage two children, Darrel Eugene and Tricia Gayle, were born. Following their marriage they spent their life together in Freedom farming and ranching along the red bluffs of the Cimarron River where his passions were always his family, the ranch, cattle and his faithful Blue Heeler dogs. During the Vietnam era he served in the U.S. Army Reserve 95th Army Reserve Training unit for 8 years where he attained the rank of Drill Sergeant. Larry was a member and of the Freedom Christian Church and served as a Deacon, Coop Board, Town of Freedom Board, Oklahoma State School Board Association and spent 13 years on the Freedom School Board as clerk and President. He was also a lifetime member of the Cimarron Cowboy Association. He was an avid supporter of 4H, FFA, and was a cook for many years at the Freedom Rodeo concession stand. Larry is survived by his wife, Judy; a son Darrel and his wife Lisa of Freedom; a daughter Tricia and her husband R.L. Coday of Alva; Three granddaughters, Erica Anne Coday, Taylor Nicole and Kalea Jo DeVine; a grandson B.J. Baker and his mother Lillian Devine; two sister-in-laws, Imogene Peterson of Freedom and Dorothy Puckett of Fredonia, Kansas; two brother-in-laws, Bill and Lynda Fender of Yukon, Bob and Pat Fender of Roseburg, Oregon; two special friends, Chet Warren of Oskaloosa, Kansas and Lee Prigmore of Alva; a host of nieces, nephews, friends and church family. PDF Printable Version

Larry Gene son of, Lillian Emma (Gerloff) and Lewis Joe Devine was born on January 9, 1943 in Freedom. He passed away at his home on the 3rd day of August at the age of 68 years, 6 months and 5 days. He attended the Freedom Public School through... View Obituary & Service Information

The family of Larry Gene DeVine created this Life Tributes page to make it easy to share your memories.

Send flowers to the DeVine family.