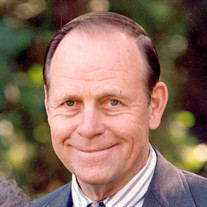 Landis Trekell, age 85, of New Boston, TX, passed away on December 1, 2020, at Wadley Hospital in Texarkana, TX, after a 22 day stay in ICU battling Covid-19. A memorial service will be held in Nash, TX on December 3, 2020, at Chapelwood Funeral Home with visitation from 4 to 5 pm and the memorial service from 5 to 6 pm. Public visitation will be in Alva, OK, at Wharton Funeral Chapel, from 10 am to 12 pm Saturday, December 5, 2020. Private family graveside services will also be held on Saturday, December 5, 2020 at the Freedom, OK cemetery at 2:00 P.M. Arrangements are by Texarkana Funeral Home of Texarkana, TX, and Wharton Funeral Chapel of Alva, OK Landis was born on February 27, 1935, near Fort Supply, OK to William Albert and Eula Alice (Lindell) Trekell. His early years were spent on the ranch at Ft. Supply, Ok, on a farm near Ringwood, Ok, and later in Enid, OK, where he attended junior high school and high school, graduating in 1953. He attended Northwestern State College from 1954 to 1958, where he graduated with a BS degree in Industrial Arts Education. He received his Masters degree from Oklahoma State University in 1964 in Industrial Education with emphasis upon Vocational Carpentry. Landis had several teaching jobs in the Industrial Education field, with his first being in Walsh, CO. His next job was teaching vocational carpentry in Waynoka, OK for seven years before becoming the Building Trades instructor, building a new house each year with his students at the Oklahoma Northwest Area Vocational-Technical School in Alva, OK (1972-1990) where he retired in 1990 after 32 years of teaching. He is quoted as saying “I enjoyed every year of it.” Many of his former students have remarked that they have used the skills acquired in his classes more than many other things in their education. On October 9, 1955, Landis was united in marriage to Betty Jean Wanger. To this marriage, three children were born: Rhonda Kay, Cynthia Ann, and Kirk Albert. His precious wife, Betty, passed away in 2007, after a six year battle with cancer. On August 30, 2008, he married Geneva Ann McCarter of New Boston, TX. With that marriage, he acquired more loving family. Landis was an interesting man, with many talents and hobbies. He enjoyed woodworking, woodcarving, silver-smithing, rock hounding, hunting and collecting Indian artifacts, antique cars, writing poetry, (mostly about bible stories and characters), and collecting old tools. He had a huge collection of wise sayings, proverbs, quips, and stories. His father (William Albert Trekell) participated in the Cherokee Outlet land run of 1893, and Landis had a great interest in that. He loved teaching his grandchildren about life and the Lord, and building things with them. He was a devoted Christian from the time of his baptism as a teenager, in Enid, OK. He taught many sermons with his life and from the pulpit. He was a member of the church of Christ. Landis was preceded by his parents, his first wife, Betty, his brothers, William (Billy) Trekell, and Erlin Trekell. He is survived by his wife, Geneva, his brother, Larry Trekell (Johnnie), his sister, Marilyn Sexton (Paul), his children, Rhonda Fields (Kevin), Cynthia Nighswonger (Tom), and Kirk Trekell (Kim), his grandchildren, Grayson Fields (Cambra), Landon Fields (Emily), Clinton Nighswonger (Diana), Tyler Nighswonger (Lindsey), Brittany McGrew (Justin), Blake Trekell, Bradley Trekell (Jenni) and great grandchildren, Zoe and Flint Fields, Addison Fields, Callie Nighswonger, Audrey Nighswonger, Kaden, Evan, and Lydia McGrew, Carlee, Sierra, and Bailey Trekell. Also surviving are many nieces, nephews, other relatives and friends. Landis is also survived by Geneva’s family, Andy McCarter (Christy), Sheila McCarter (James) and 7 grandchildren and 4 great grandchildren. Memorial Contributions in his memory may be made to the Northwestern Oklahoma State University foundation, the Alva Church of Christ c/o Wharton Funeral Chapel, or the charity of your choice.

Landis Trekell, age 85, of New Boston, TX, passed away on December 1, 2020, at Wadley Hospital in Texarkana, TX, after a 22 day stay in ICU battling Covid-19. A memorial service will be held in Nash, TX on December 3, 2020, at Chapelwood Funeral... View Obituary & Service Information

The family of Landis Trekell created this Life Tributes page to make it easy to share your memories.

Send flowers to the Trekell family.