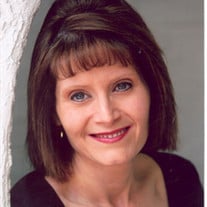 Lana Kay, Daughter of Sharon (DeVilbiss) and Larry Lyon was born on November 9, 1962 in Waynoka, Oklahoma. She passed away at the Enid Bass Baptist Health Center on the 3rd of February at the age of 47 years, 2 months and 25 days. She attended the Alva School system and graduated with the class of 1981. She then attended Northwestern Oklahoma State University and received her BA Degree in Music Education in May of 1986. Miss Lyon was married to Gregory Alan Joachims on September 15, 1984 at the Alva First Baptist Church. To their marriage Tyson and Shanae were born. Following their marriage they made their home in Alva. She worked at the Dairy Queen while in High school, then Share Medical Center and Convalescent Home while in College. Later she taught at Carmen/Dacoma schools and received a number of awards with her band. She then returned to the Health Care field where she worked as a Home Health Nurse, Hospice Care and volunteer Ombudsman. For the last fifteen years she worked as a veterinarian assistant and office manager for the Alva Veterinarian Clinic as she loved animals. She was a member of the Alva First Baptist Church and active in the Youth Group. A member of the International Order of the Rainbow for Girls Assembly #28, the Local advisory Board since 2004. She received the Grand Cross of Colors in 2008 the highest award given in Rainbows. Member of the Alva Chapter of the Eastern Star, the National Music Association and a volunteer coach for the Alva Youth Council. She was a Girl Scout and later a Troop Leader an active member of the Alva Band and Electric Gold Booster, an Advisor for the Northwest Vo-Tech. She was preceded in death by a baby brother, Greg Vernon, her grandparents, Estol and Mabel DeVilbiss, Harley and Gertrude Lyon, parent-in-laws, Dwayne and Evelyn Joachims, three aunts: Vivian Fiscus, Delys Hull and Karen Bay and an Uncle Ronald Lyon. Lana is survived by her husband Greg, a son Tyson and a daughter, Shanae and her parents Larry and Sharon Lyon all of Alva. A brother Randy and Sonja Lyon and their children. A sister-in-law, Kathy and B.L Salazar and a brother-in-law Steve and Claudia Joachims, a number of nieces, nephews, other relatives and friends. Contributions may be made in her memory to NWOSU Music Department or the Joachims Love Fund set up at Central National Bank of Alva. Lana was always a giving person, even in death as a donor. Her motto she lived by was “To thine own self be true”. At her request the casket will not be open. PDF Printable Version

Lana Kay, Daughter of Sharon (DeVilbiss) and Larry Lyon was born on November 9, 1962 in Waynoka, Oklahoma. She passed away at the Enid Bass Baptist Health Center on the 3rd of February at the age of 47 years, 2 months and 25 days. She attended... View Obituary & Service Information

The family of Lana Kay Joachims created this Life Tributes page to make it easy to share your memories.

Send flowers to the Joachims family.