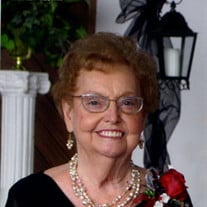 A service celebrating her life will be held at Hopeton Wesleyan Church on Thursday, May 14th, at 2:00. The family will greet friends from 5:30 to 7:30 on Wednesday, May 13th, at Wharton Funeral Chapel. A private burial will be held before the memorial service. LaVona Mae, daughter of Maurice Everet & Reah Lucinda (Perfect) White, was born in Dacoma, OK, on December 20, 1921. She entered heaven’s gates on May 11, 2015, at the age of 93 years, 4 months & 21 days, to join her Lord & Savior, one day after spending Mother’s Day with her family in Alva. LaVona started school in Enid, where her daddy worked for the railroad. When the Depression hit, they moved back to Dacoma. She attended Mt. Zion & Dacoma High School. On September 14, 1938, she married Gerald Arthur Budy. To this marriage, three girls were born, Phyllis Jeanene, Loween Kay & Sheri Lyn. They were blessed with 65 years together, living on the farm where Gerald was born until his passing in 2003. In 2007 she moved to Alva, where she lived until her death. LaVona had an unwavering faith in God. She attended Pleasant View Pilgrim Holiness Church, in her early years, where she sang & played the piano. In 1962 she & Gerald joined Hopeton Wesleyan Church, where she taught children’s Sunday School. Mrs. Budy attended faithfully until physical restrictions prohibited her attendance. LaVona was actively involved in the farm operation. In addition, she sold Avon products for over 38 years. She won many prizes for top sales over the years, including several trips & cruises. Mr. & Mrs. Budy enjoyed traveling together, seeing beautiful sights & visiting family & friends. LaVona loved sewing for her girls & grandchildren. She would draw pictures of clothes her girls liked while shopping & then go home & make them with a home-made pattern. She made many sets of curtains for herself & her family. She liked to add personalization, cross stitching & embroidery, to her hand-made items. Mrs. Budy loved helping others. She had a real compassion for those in need & touched the lives of many people throughout her lifetime. Most of all, she loved spending time with & helping her children & grandchildren. In addition to her husband, she was preceded in death by her parents, her parents-in-laws, her daughter, Loween Maynard, & a son-in-law, Junior Hofen. LaVona is survived by two daughters: Jeanene Hofen, Sheri Bushman & husband, Dennis; eight grandchildren: Janita Hofen, JayDon (Karibeth) Hofen, JoVona (Gregg) Matthiesen, Jeff (Sharon) Hofen, David (Tammy) Zahorsky, Jaime (Craig) Ricke, Jared (Rachel) Bushman, Jonathan (Jana) Bushman; & eleven great-grandchildren: Jason Hofen, Sarah (Mikel) Chapman, Ryan (Joy) Matthiesen, Stephanie (Clint) Hummel, Caitlin & Makenzie Hofen, Avery, Aidan & Adelaide Bushman & Tatum & Trendon Ricke, one niece Carolyn Rexroat & one nephew Terry (Jane) Budy. She was a special Godly woman & will be greatly missed by many. We will mourn her passing, but celebrate her remarkable life & the heritage she leaves for her family. PDF Printable Version

A service celebrating her life will be held at Hopeton Wesleyan Church on Thursday, May 14th, at 2:00. The family will greet friends from 5:30 to 7:30 on Wednesday, May 13th, at Wharton Funeral Chapel. A private burial will be held before the... View Obituary & Service Information

The family of LaVona Mae Budy created this Life Tributes page to make it easy to share your memories.

A service celebrating her life will be held at Hopeton Wesleyan...

Send flowers to the Budy family.