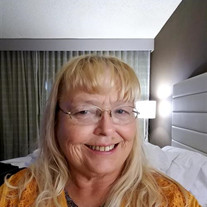 Kimberly Ann was born in Alva Oklahoma on February 22, 1960 to Shirley (Haltom) and John Murray. She passed away on February 16, 2019, at her home in Hopeton, OK at the age of 58 years, 11 months and 25 days. Kim attended the Alva School System graduating with the Class of 1978. She attended Northwestern State University and received a Bachelor’s Degree in Teaching. On December 16, 1978 she married Roy Lee Daniels at the Alva Nazarene Church. After their marriage they made their home in Hopeton, OK and to this marriage a son Levi John was born. Kimberly taught school at Helena-Goltry School System for 1 year. She helped out on the farm for about three years. In 1985 she went to work at Hopeton State Bank as a bank teller where she remained for 32 ½ years retiring on August 30, 2017. She was always working outside around the yard, arranging lawn ornaments, and in her garden. She loved hunting and fishing with her husband Roy. Kim was member of the Western bells out of Cherokee and the Hopeton Wesleyan Church. She was an active singer in the praise and worship team for the church for many years. She was preceded in death her parents and grandparents. Kim is survived by her husband Roy Lee of the home, their son Levi and Brina, a granddaughter Emilia all of Little Rock AR; and aunts, Marcile Lancaster of Alva, OK, Doris Koon, of Wichita, KS, Pauline Murray of Hugoton, KS and Envona Murray of Aline, OK, an Uncle, Eldon and wife Annalee Murray of Woodward, OK and cousins, Austin Quinn of Shawnee, OK, Lelan and Teresa Lancaster of Dodge City, KS and Lynn Lancaster of San Diego, CA; a number of nieces, nephews and other relatives and friends. Memorial contributions may be made in her memory to Stephenson Cancer Center

Kimberly Ann was born in Alva Oklahoma on February 22, 1960 to Shirley (Haltom) and John Murray. She passed away on February 16, 2019, at her home in Hopeton, OK at the age of 58 years, 11 months and 25 days. Kim attended the Alva School System... View Obituary & Service Information

The family of Kimberly Ann Daniels created this Life Tributes page to make it easy to share your memories.

Send flowers to the Daniels family.