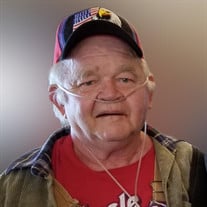 Kenneth Eugene, son of the late Ila (Wanger) and Harold Knabe, was born on April 17, 1946 in Freedom, Oklahoma and passed from this life on December 21, 2019 in Alva, Oklahoma at the age of 73 years, 8 months and 4 days. Kenneth attended school in Freedom, Oklahoma. On September 1, 1967 He was united in marriage to Deloris McKitrick, and instantly became a father to her 5 children: Don, Randy, Linda, and James McDonald and Anita Brown. They were quickly blessed with a son, Kenneth, Jr. Kenneth was a hard working man, working various jobs in the area. He was good with his hands and did carpentry, painting, construction and masonry. He worked for Buck Knabe for many years laying brick and stone on numerous houses around town. He worked in the custodial department at NWOSU for about 5 years after which he worked for Dempsy Roten constructing metal buildings. In 1995 he was forced to retire early due to heath problems. Following the death of Deloris in 2005, he reunited with an old flame from his younger years, Linda Hendricks. They resided together in Alva until his death. Besides his parents and wife, he was also preceded in death by a daughter, Linda Burt, a brother, Jimmy Knabe, and a sister, Rene Kasparek. He is survived by four sons: Kenneth Knabe, Jr. and wife Vonda, Don McDonald and wife Cindy, Randy McDonald, and Jim McDonald and one daughter, Anita Brown. A son-in-law, Jim Burt. A sister, Carolyn Shook and husband James, His girlfriend, Linda Hendricks. A step-son Curtis Fulkerson and wife Bennetta. Eight grandsons: Kendal and Kristopher Knabe, Jonathon Huff, Aaron, Scott, Cody, and James McDonald, and Kyle McCoy. Nine grandaughters: Kayla Gilchrist, Kasha Werve, Amber Cook, Amanda Hale, Elizabeth and Brittany Burson, Casey Winters, Whitney and Alyssa Kenyon. Three step-grandsons: Brandon Fulkerson, Jeremy Sterling, and Jim Beason. One step-granddaughter: Sharra Fulkerson. 30 great grandchildren, and many other friends and relatives. Memorial contributions may be made in his memory to Wharton Funeral Chapel.

Kenneth Eugene, son of the late Ila (Wanger) and Harold Knabe, was born on April 17, 1946 in Freedom, Oklahoma and passed from this life on December 21, 2019 in Alva, Oklahoma at the age of 73 years, 8 months and 4 days. Kenneth... View Obituary & Service Information

The family of Kenneth Eugene Knabe created this Life Tributes page to make it easy to share your memories.

Send flowers to the Knabe family.