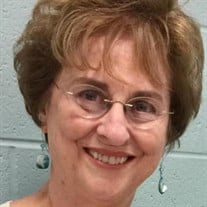 Karen Sue (Kessinger) Nickell’s love for Jesus and her family didn’t come to an end with her death on September 11, 2021. Karen passed away at home at the age of 80 after a courageous five-year battle with cancer surrounded by loved ones who will continue to honor her legacy by spreading the message of Christ. She was born to Paul and Jennilee Kessinger on May 9, 1941 in Alva, Oklahoma. After graduating from Alva High School in 1959 she attended Northwestern Oklahoma State University and went on to graduate from Oklahoma State University in 1963. She taught English, Speech, and Drama at Orlando High School for 2 years. Karen and Dr. Joe F. Nickell were married on July 27,1962. Upon Joe’s graduation from veterinary school at Oklahoma State University, they moved to Wichita, KS where he began his career, and she began what she considered to be her greatest honor--motherhood. Together they had four children: Tommy, Amy, Debbie, and Mike. In 1973, the family moved to Oklahoma City where Joe opened his own practice. Karen became a dedicated and enthusiastic supporter of her children and their activities, including being a Cub Scout leader, Campfire leader, and held several offices in PTA. She was an active member of Draper Park Christian Church and was a youth sponsor, director of many youth/teen musicals, a member of the choir, and made herself available to serve wherever she could. Karen re-entered the work force after becoming a widow at the young age of 49. By clinging to God’s promise in her favorite verse, Ephesians 3:20, she provided for her family through her faith in God, determination, and strong work ethic. Karen taught for a few years before joining the Oklahoma State Department of Education as a secretary. Her hard work led to promotions and finally the position of Director of Professional Standards and Teacher Certification from which she retired in 2011. Through her, we know what resilience and perseverance truly look like. Friends were always important throughout Karen’s life. She remained friends with so many from her childhood in Alva and continued to collect friends along her way through life. She found such joy in spending time with friends in her Bridge group, Bunco group, bible study groups, and the “Coke Club” girls who grew up together in Alva. The absolute lights of her life were her grandsons…all ten of them. She was with them wherever they were as often as she could be with them. Nana loved everything from traveling, going to the park, playing games at home, making them cinnamon toast, to attending their innumerable sporting events. She created memories with them that they will always treasure. Karen is survived by her children, Tommy and wife Darlene of Oklahoma City, Amy Nickell of Oklahoma City, Debbie Wright and husband Chris of Oklahoma City, and Mike and wife Kristie of San Antonio. Grandsons Zach Nickell and wife Courtney, Jarod Nickell and wife Kaylee, Landon Moss, Carson Moss, Jacob Wright, Joseph Wright, Nicholas Wright, Sam Wright, Tyler Nickell, and Connor Nickell and most recently her great-grandson Cooper Nickell. Her brother John Kessinger, sister Janice Banister and husband Cornelius as well as many nieces and nephews. She also leaves behind many who considered her a surrogate mother and friends who were her family. Her home and heart were open to everyone. Karen was preceded in death by her parents, Paul and Jennilee Kessinger, and her husband, Dr. Joe F. Nickell. Karen’s passion for Christ and serving led her to do monumental things. Her ultimate desire until the end was that everyone would accept Christ as their personal savior and have eternal life to be reunited with her in heaven. A memorial service will be held at 11:00 a.m. on Tuesday, September 21 at Calvary Church located at 3730 N. Porter Ave. in Norman, OK. A brief graveside service will be at Alva Municipal Cemetery at 11:30 a.m. on Wednesday, September 22. The funeral procession will begin at 11:00 a.m. at Wharton Funeral Chapel located at 1302 Oklahoma Blvd. in Alva, Oklahoma.

Karen Sue (Kessinger) Nickell&#8217;s love for Jesus and her family didn&#8217;t come to an end with her death on September 11, 2021. Karen passed away at home at the age of 80 after a courageous five-year battle with cancer surrounded by loved... View Obituary & Service Information

The family of Karen Sue Nickell created this Life Tributes page to make it easy to share your memories.

Karen Sue (Kessinger) Nickell’s love for Jesus and her family...

Send flowers to the Nickell family.