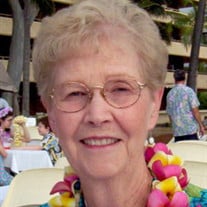 View the image gallery -- View a Video -- Julia Alexander Julia Ethel, daughter of Ethel Goldie (Meharg) and James Walter Berry was born May 21, 1929 in Russell County, Kansas. She passed away May 11, 2013 at Beadles Nursing Home in Alva, Oklahoma at the age of 83 years, 11 months and 20 days. She attended Russell County and Hoisington Kansas Schools, graduating with the class of 1947. On April 18, 1948 she was united in marriage with Lloyd E. Alexander in Hoisington, Kansas. To their marriage, four children, Douglas, Deborah, Kim and Jan, were born. In 1958 the family moved to Phoenix, Arizona. While she raised their children she also worked as a secretary for both the State of Arizona and General Electric. Lloyd, Julia and their two youngest daughters moved back to Hoisington, Kansas in 1973 where they made their home until her husband’s retirement in 1986. In retirement they made their home in Missouri, Arizona and finally in Holiday Island, Arkansas. Following her husbands death in 1995, Julia moved back to Arizona where she lived until April of this year when she moved to Alva, Oklahoma to be near her youngest daughter. Julia loved to travel and had visited each of the 50 states. She was a member of the New Song Methodist Church of Surprise, Arizona. Preceding her in death are her husband, her parents and a brother, Lester Berry. She is survived by her son Douglas Alexander (Samruen) of Yorktown, Virginia; three daughters, Deborah Turpin of Phoenix, Arizona, Kim Cox (Don) of Surprise, Arizona, and Jan Schultz (Ken) of Alva, Oklahoma; six grandchildren; five great grandchildren and her cat Snoopy. PDF Printable Version

The family of Julia E. Alexander created this Life Tributes page to make it easy to share your memories.

Send flowers to the Alexander family.