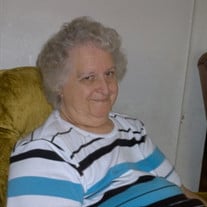 View the image gallery -- View a Video -- Juanita L. Smith Juanita Lenora Smith passed away in Guymon, Oklahoma on the 16th of February at the age of 81 years, 8 months and 5 days. She was born on June 11, 1930 in Coleman County, Texas to Ethel (Bailey) and Ules Duncan. She Attended the Voss, Texas school system and graduated with the class 1946 as valedictorian. She was married to Oble Dooley and to this union two daughters were born, Linda and Vickie. On April 3, 1977 she was married to Gwin Smith in Miami, Oklahoma. Juanita owned and operated the Me-Too Day Care Center in Alva for 37 years. She touched the lives of hundreds of families. She was preceded in death by her parents, a sister Irene Duncan, a brother LeeRoy Duncan, her husband Gwin Smith and an infant son. Juanita is survived by her daughter Linda Hendricks and companion Kenneth Knabe of Alva, daughter Vickie and husband Warner McKinnon of Guymon; three grandchildren and their spouses Curtis and Bennetta Fulkerson, Jackie and Wesley Robertson, Kimberlie and Conrad Cook; great grandchildren, Brandon and Sharra Fulkerson, Jeremy Sterling, Isabella and Rhys Robertson and Anaura and Alex Cook; a brother and his wife H.M and Maureen Duncan; several nieces, nephews, other relatives and friends. PDF Printable Version

View the image gallery -- View a Video -- Juanita L. Smith Juanita Lenora Smith passed away in Guymon, Oklahoma on the 16th of February at the age of... View Obituary & Service Information

The family of Juanita L Smith created this Life Tributes page to make it easy to share your memories.