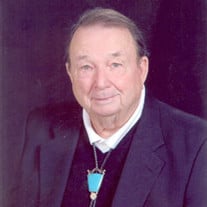 John Edward son of Helen Amanda (Mars) and Earnest Hubble Holtzclaw was born November 11, 1925 in Wichita, Kansas. He passed away suddenly at his home in Alva on April 22, 2009 at the age of 83 years, 5 months and 11 days. He attended the Sapulpa School System where he graduated from high school with the class of 1944. John served in the Army Airforce as a Staff Sargeant during WWII as an air crew member on B-24 Armament Gunners in the China India Burma Theater. On September 15, 1946 John married Zelda Darlene Enochs in Sapulpa, Oklahoma. To their marriage a son, Mark John was born. John attended college at Morningside College in Sioux City, Iowa; Bradley University in Peoria, Illinois where he received his Horology Degree; and NYU City College in New York City. In 1954 John, along with his wife Darlene, founded Holtzclaw’s Jewelry Store in Alva, Oklahoma. They operated this much loved business for 37 years, selling the finest of jewelry, china, silver, and giftware. On December 21, 1994, Lynn Martin of the Alva Review Courier wrote, “It is doubtful Alva will ever again see the likes of a Holtzclaw Jewelry. John could fabricate anything. His design taste was outstanding…but he could make minuscule photo parts, too.” In 1967 John founded Jole’ Manufacturing in Alva. This company manufactured 18k gold and platinum settings with Kaplan diamonds and fine colored stones. His works were distributed by Kaplan and many of the fine jewelers in the U.S., including Tiffany, Cartier, Michael Schiffner and many more. Business interests dictated John and Darlene travel world-wide with visits to major gem and gold deposits and all major jewelry markets. John won international awards for his jewelry designs, including the prestigious Diamonds International Award in 1987. He was a member of the American Gem Society, where he served as a member of the Diamond Standards Committee. He also served as both president and vice-president of the Southwest Guild. In addition to his outstanding jewelry skills, many customers will long treasure the craftsmanship of his one-of-a-kind hand-engraved pieces. John was a member of the First United Methodist Church and the Alva Golf and Country Club. Those in Alva may best remember John for his love of the game of golf. John spent countless hours at the Alva Golf and Country Club working on his game and also devoted much of his retirement to refining his golf clubs in his manufacturing shop in Alva. He is preceded in death by his parents, Helen and Earnest. John is survived by his wife Darlene of the home; one son Mark and his wife Joyce of Bakersfield, California; one grandson Brad of Tulsa, Oklahoma; all the girls from Holtzclaw’s Jewelry Store; very special friends Adam and Andrew Holder; and many friends and devoted customers. He will lay in state at the funeral chapel until Friday evening at 9:00 P.M. PDF Printable Version

John Edward son of Helen Amanda (Mars) and Earnest Hubble Holtzclaw was born November 11, 1925 in Wichita, Kansas. He passed away suddenly at his home in Alva on April 22, 2009 at the age of 83 years, 5 months and 11 days. He attended the Sapulpa... View Obituary & Service Information

The family of John Holtzclaw created this Life Tributes page to make it easy to share your memories.

Send flowers to the Holtzclaw family.