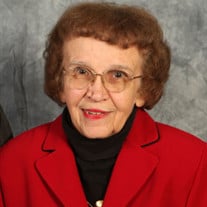 Helen Joan was born April 20, 1935 at Lawrence, Kansas the daughter of Carol (Burgtorf) and Floyd Talley. She passed away in Alva on the 21st of November at the age of 77 years, 7 months and 1 day. Joan attended the Peabody Kansas schools till her sophomore year and graduated from the De Soto Kansas High School. She received a Bachelors Degree of Science in Education from the University of Kansas and a Masters of Education Degree from Northwestern Oklahoma State University. Miss Talley was married to Jack Fisher on August 6, 1955 in De Soto, Kansas. To their marriage two sons were born, Charles and Robert Fisher. In 1966 the family came to Alva, OK where Mrs. Fisher taught 3rd grade at Washington and later at Longfellow grade schools. She retired from teaching after 32 years. Joan was a member of the Alva First United Methodist Church. She also served in various offices of the Hannah Circle of the United Methodist Women, and was the church pianist. She accompanied the Alva Boys Choir for many years, along with the church men’s quartet and the children choirs and other events. She had been a member of Chapter C, PEO, Researsh Club, DKG, Retired Teachers, Nescatunga Arts and Humanities, Monday Night Supper Club and Colonial Dames. She was preceded in death by her son Charles and her parents. Joan is survived by her husband Jack of the home; a son and his wife, Robert and Kara of Elk City, 2 grand children, Jennifer of Elk City and Tyler Fisher of Crescent, OK; 4 Step-grand children, Kassie Morse, and Kayleigh Reed of Elk City, Jeneé Robinson of Cheyenne, and Stephanie Bessman of Crescent; a brother and his wife, Jim and Donna Talley of Chicago, Illinois; a niece, Angela and a nephew, Jeff. PDF Printable Version

Helen Joan was born April 20, 1935 at Lawrence, Kansas the daughter of Carol (Burgtorf) and Floyd Talley. She passed away in Alva on the 21st of November at the age of 77 years, 7 months and 1 day. Joan attended the Peabody Kansas schools... View Obituary & Service Information

The family of Joan Fisher created this Life Tributes page to make it easy to share your memories.

Send flowers to the Fisher family.