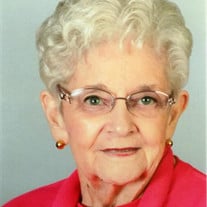 Jo Rhea, daughter of Jewel (Howard) and Reverend John Strutton, was born September 17, 1928 in Glen Rose, Texas. She passed away, in Alva, Oklahoma, March 05, 2019 at the age of 90 years, 5 months and 16 days. At the age of 12 her family moved to Alva. She attended the Alva school system and graduated from Alva High School. She also graduated from NWOSU with a degree in Home Economics. She met her future husband, Ivan Lansdown at Falls Creek and on July 20, 1947 they were married at the Alva First Baptist Church by her father, Rev. John Strutton and her father-in-law, Rev. E. Ray Lansdown. To their marriage three children, John, Joe and Mary Anne, were born. Following their marriage they made their home in Alva. JoRhea was a 5th grade teacher at Washington Elementary School and retired in 1986. After retiring JoRhea and Ivan loaded the R.V. and started traveling. JoRhea was a member of the First Baptist Church for many years. She loved quilting, reading, sewing and listening to music. She was preceded in death by her parents, her husband Ivan, and three sisters, Jean, Mary and Carol. JoRhea is survived by her children and their spouses, John and Dorilyn, Joe and Sara, Mary Anne and Mark Rauh; six grandchildren, Aaron Lansdown, Nicole and Eric Warehime, Emily and Scott Roddy, Amy Lansdown, Brian Lansdown, Angela and Tyler Brooks; six great grandchildren, Austin Lansdown, Aubrey and Erika Warehime, Matthew, Nicolas, and Linley Roddy. She is also survived by many nieces, nephews other relatives and friends. Memorial Contributions are made out to Bank It (Alva Library Youth Activities)

The family of Jo Rhea Lansdown created this Life Tributes page to make it easy to share your memories.

Send flowers to the Lansdown family.