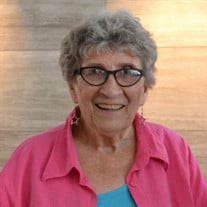 There will be a visitation Sunday June 24, five till seven p.m. at Wharton Funeral Chapel. Burial will be Monday June 25 at 10 a.m. at the Alva Cemetery with a memorial service at Wharton’s at 2 p.m. Jo Ann Scribner Cole, the only child of Lillian (Buckles) and Joe Scribner was born in Alva on December 5, 1931. Jo Ann was the granddaughter of homesteaders on both the Buckles and Scribner side, and was always very proud of her pioneer heritage. As a child, Jo Ann helped with her parent’s businesses and was driving a truck for their custom cutting at the age of 13. She also loved her parent’s ranch northwest of Freedom and often talked of Whiteman, her favorite horse, who arrived in a boxcar of cattle shipped up from Mexico. Her parents, in partnership with her Aunt Verna (Scribner) Faulkner owned the Oklahoma Cigar Store. When the son of their cook, Ruby Cole, shipped off to the marines, Ruby suggested Jo Ann write him letters. That turned into a wonderful love story, lasting over sixty-six years. Jo Ann and Kenney made their home in Alva. Kenney mostly worked for the Alva Police department, and Jo Ann became a homemaker. Like everything else she did, she excelled at it. Her flower beds were beautiful, her meals always would have made her home ec teacher happy, and she became an accomplished seamstress. She made fantastic formals and party dresses for her girls. After the girls were grown and out of the house, she turned her talents to crafting. For years she and Kenney did the craft show circuit where she sold her beautiful fabric creations including dolls, purses, aprons, etc. She was often asked to participate in exclusive shows as far away as Branson and Kansas City Missouri. She founded the first craft show in Alva, a legacy that continues today. After Kenney retired they bought their first motorhome and began traveling. In their motorhome they drove to 49 states. They flew to Hawaii to complete the list. The family often joked that if they could have loaded the motorhome on a ferry and taken it to Hawaii they probably would have. They enjoyed many trips with their friends and travel buddies, especially the Klines and the Browns. They enjoyed several weeks each summer in the mountains of Colorado and several weeks each fall in Texas, then off to Winterhaven, California to be a snow bird. Jo Ann was active in many civic and volunteer activities. When the police department sponsored the Easter Egg Hunts, Jo Ann boiled and colored countless dozens of eggs. She was a Girl Scout as a child, and then became a Girl Scout Leader. She volunteered at the Cherokee Strip Museum and helped with the flower beds there. Jo Ann was a member of the Petunia Unit of the Alva Garden Club Council from its founding in 1960 through the present. She served as club president several times and as Northwest District Garden Club president. She always took dozens of plants and arrangements to the Woods County Fair, along with jellies, pickles, quilts, and craft projects. She was always disappointed if anything didn’t get a blue ribbon. Fortunately for her most of her entries did. Jo Ann passed away Thursday June 21 at the age of 86. She is survived by daughter Virginia and her husband Jon David Toler of Belleville, IL, their two daughters, Victoria Lillian and husband Brian Uphoff of Seattle, WA. And daughter Ann Kathleen and husband Brian Neighbors, with their daughter Natalie, also of Belleville. Also, daughter Susan and husband Dave Koontz of Alva and their daughters; Allison Cole and daughter Lydia of Boulder CO and Sarah and Elliott Bates and daughter Aubrey Allison of Basalt Colorado. Memorial donations may be made to Cherokee Strip Museum or Beadles Activity Fund.

There will be a visitation Sunday June 24, five till seven p.m. at Wharton Funeral Chapel. Burial will be Monday June 25 at 10 a.m. at the Alva Cemetery with a memorial service at Wharton&#8217;s at 2 p.m. Jo Ann Scribner Cole, the only child... View Obituary & Service Information

The family of Jo Ann Cole created this Life Tributes page to make it easy to share your memories.

There will be a visitation Sunday June 24, five till seven p.m....

Send flowers to the Cole family.