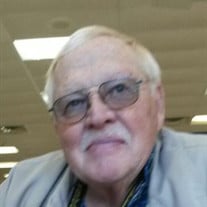 Jimmie Lee Case, better known as Jim, was born on January 22, 1942 to Lotus �Red� and Hazel (Myers) Case in Alva, Oklahoma. He passed away on December 31, 2016. At the age of 74 years 11mouths 9 days. Jim attended Longfellow Elementary, Horace Mann for middle school, and graduated from Alva High School in 1960. He learned the value of work from an early age. He began delivering the daily newspaper by the time he was nine. In his early teens, he helped his father deliver milk for Gold Spot Dairy, and worked for OG&E turning on gas lines. After high school, Jim graduated from Northwestern Oklahoma State University with a Bachelor of Science in Business with a minor in Social Work. He consecutively worked at the Alva Municipal Airport, Burroughs Corporation of St. Louis, Missouri, Alfalfa Electric Cooperative in Cherokee, Helena State School for Boys, Vocational Rehabilitation Services, Northwest Family Services, Crabtree Correctional, and the Northwest Treatment Center. Throughout his life he owned and operated several businesses, namely the Dinette Caf�, Daylight Donuts, J&B�s Family Restaurant, and Red�s BBQ. Most recently, he enjoyed the privilege of being employed by Alva Public Schools as a para-professional working one on one with children. He is preceded in death by his parents, son Jason, and granddaughter Stephanie Crowe. He is survived by his wife Barbara, his sister Georgia Beltz and husband Fred of Michigan, his son Brandon and wife Kathie of Pratt, KS, step-daughters Clydene Lyons and husband John of Enid, Rhonda Nighswonger of Alva, Vicki Nighswonger of Duncan, two nieces Sara Tandoc and husband James and Kristyn Ross and husband Brandon of Michigan, grandchildren Ashley, Emily, Ethan, Olivia, Aaron, and Alec, great-niece Aurora, great-nephews Lucas and Matthew, and extensive relatives and friends Donations may be made to the Alva Church of God.

The family of Jim Case created this Life Tributes page to make it easy to share your memories.

Send flowers to the Case family.