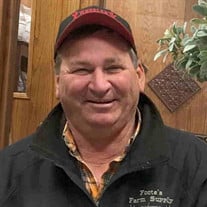 Jeff Scott, son of Barbara (Littrell) and Edward Martin Kletke was born on February 6, 1960 in Alva, OK. Jeff passed away suddenly on Saturday February 3, 2018 in Tulsa, OK. He was just three days shy of his 58th birthday. Jeff attended the Alva School System and graduated with the class of 1978. He worked on the family farm during high school learning everything he could. Then after high school he made his living as a Farmer/Rancher on the family farm raising cattle with his dad in Alva, OK. He married Shannon “Shelly” M. Strickland on April 2, 1983, to that union two children were born: A Son, Justin and daughter, Brittney. Shannon passed away on February 25, 1998. Jeff spent his extra time with his kids. He enjoyed watching them participate in different activities like Dance Recitals with Brittney and having Justin work along side of him on the farm. Jeff and Paula Kasparek were united in marriage on July 21, 2014 in Las Vegas, NV. He enjoyed attending Darian’s sporting events. He also enjoyed quality day trips with Paula. He was preceded in death by his first wife Shelly, his father, Edward on November 25, 2006 and Mother-in-law Rene Kasparek on October 26, 2014. Jeff is survived by his wife, Paula of the home, His mother: Barbara of Alva OK, One son and his wife: Justin & Stephanie Kletke of Alva OK. Two daughters: Brittney and husband Aaron Dishman of Wichita KS, Darian Carothers of Alva, OK. Two grandsons: Gavin and Kilian Dishman of Wichita KS, and many other relatives and friends. Memorial contributions may be made to the Zion Lutheran Church of Alva, OK.

The family of Jeff Scott Kletke created this Life Tributes page to make it easy to share your memories.

Send flowers to the Kletke family.