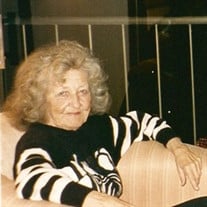 View the image gallery -- View a Video -- Jean Smith Eula Jean, daughter of Ruby Agnes (Mackey) and Chester James Wenzel was born August 29, 1926 in Alva, Oklahoma. She passed away at the Alva Share Medical Center on the 11th day of September at the age of 87 years and 13 days. She attended elementary school in Avard and graduated from Alva High School on May 19, 1944. Working on the wheat farm with her father driving a tractor was a great joy to her. After graduating Jean went to Santa Ana, California where she did her part helping with war efforts, as a fork lift operator at the McDonald Douglas Aircraft factory. In 1945 she returned to Alva where she met the love of her life, William McKinley Smith who was attending college. On July 7, 1949 in Fort Worth, Texas they were married. To their marriage four children: Randy Bill, Debra Denise, Robin Troy, and Ginger Rhea were born. Following their marriage they lived in Texas, Nebraska, Tulsa and Oklahoma City where she raised her family. In 1985 they returned to Alva to make their home. Mrs. Smith worked at the John A. Brown Company, other small dress boutiques, the Telephone Company and later owned and operated The Trading Post with her husband Bill. She was a member of the VFW Ladies Auxiliary. She was a very proud supporter of the Alva Cardinals, Ranger Athletics, she loved a lively game of pitch, traveling, garage sales, auctions and loved bargaining for what she wanted at these sales. Her family was a very vital part of her life, each of them were very close to her heart. She had a smile that everyone loved and never knew a stranger. Jean was a wonderful cook, who always had supper on the stove for her family and whoever wondered in. Proceeding her in death are her parents; a sister Wanda Bagenstos- Boatman. Five brothers in law: Mynard Smith; Joe Shell; Arnis Payne; Roscoe Bagenstos; Ray Boatman, two nieces: Gayle Owl; and Kay Baker. Jean is survived by her husband Bill of the home; four children and their spouses: Randy and Mitzi Smith of Goddard, Kansas; Debbie and Ron Hipp of Keller, Texas; Robin and Loretta Smith of Raton, New Mexico and Ginger Smith of Alva. MiMi had three Grandchildren: Jed Smith; Caleb Smith both of Alva and Madison Smith of Goddard, Kansas. Two sisters in law: Essie Shell and Rose Jean Smith, a host of nieces, nephews, great nieces, great nephews, other relatives and friends. PDF Printable Version

The family of Jean Smith created this Life Tributes page to make it easy to share your memories.