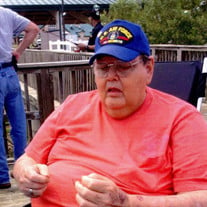 Services:Freedom Methodist Church, Thursday, October 29, 2015 at 2:00 P.M. Interment: Mount Pleasant Cemetery, North West of Freedom, OK James Walter, was born on April 24, 1949 to Bessie Louise (Cathey) and James J. “Jim” Yeager at Blackwell, Oklahoma and passed away at the Deaconess Hospital in Oklahoma City, Oklahoma on October 23, 2015 at the age of 66 years, 5 months and 30 days. Walter attended elementary school in Tonkawa, OK and then the family moved to Alva, OK. He graduated from Alva High School with the class of 1967. After graduation he went on harvest and in March of 1968 he joined the United States Air Force serving for over 20 years. While stationed at Chanute AFB, he met his wife to be Deanne Ruth Elliott and was married in May of 1969 in Springfield, IL to their marriage two children were born Ruthann Alicia and James Michael. James served in Vietnam and was stationed in Korea, Texas, Alaska, Florida, and Louisiana during his 20 years of service. He met Linda F. Olden, in Alexandria, LA and was married February 14, 1978. He accepted Christ into his life and was baptized in 1979. James retired in 1988 after 20 years serving our country and started working for the United States Postal Service in Alexandria, LA. In 2007 he move to Alva OK. He has resided at the Veteran’s home in Clinton for the last three years. He was preceded in death by his parents and a sister Carolyn Louise and a brother-in-law, Jimmie Woodard. Walter is survived by his wife Linda, his daughter Alicia and son Michael both of Springfield, Illinois. A sister Sherrie Woodard of Freedom, Oklahoma, a brother-in-law and family of Louisiana, nephew and nieces Kurtis, Bretta and Marlo, and great nephew and nieces Jimmie, Lacy, and Kassidy, a number of other relatives and friends. Memorial contributions may be made in his memory to Clinton VA Member Benefit Fund through Wharton funeral Chapel.

The family of James Walter Yeager created this Life Tributes page to make it easy to share your memories.

Send flowers to the Yeager family.