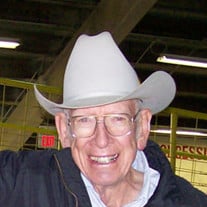 J. W., son of Paul M. and Edith (Smith) Small was born on July 13, 1928, at Ashland, Ks. He passed away in Integris Baptist hospital in Oklahoma City, OK on December 22, at the age of 81 years 5 months and 9 days. He began his education at a small country school, Keystone, in Alfalfa County for two years. He then attended Lambert School for two years. His family then moved to the Dacoma area where he completed his public schooling in Dacoma Schools, graduating in 1946. He then attended Oklahoma A&M, now OSU, for two years. He returned to Dacoma, in 1948, to take over his Fathers commercial hog buying business. Shortly after returning from Stillwater he married the love of his life, Ruth Ann Vore. From that union, four children were born; Preston, Jennie, Jeanette and Lisa. J.W. and Ruth celebrated their 60th wedding anniversary on September 23, 2009. He operated the hog buying business for over 50 years, and also was involved in cattle, wheat and hay business's. He followed in his fathers footsteps by becoming involved with thoroughbred horse racing, which he and Ruth enjoyed together. He enjoyed all aspects of the business, especially watching a newborn colt progress to being a successful, winning race horse. J.W. especially enjoyed going to the races with his family in tow. J.W. was involved in numerous community organizations and boards; Too many to mention individually. J. W. enjoyed watching his children, and in later years, his grand children participate in their academic and athletic interests. As a member of the Alva Wesleyan Church J.W was an active member and supporter of the Church's many activities, beliefs and projects. J.W. is survived by his wife Ruth Ann, of the home, a Son, Press of Norman; three Daughters, Jennie Small of Woodward, Jeanette Atha and her husband Fred, of Clinton, Lisa Boler and her husband Mark of Enid. Four Grandchildren, Justin Small, and his wife Miranda of Oklahoma City, Travis Small, of Cleveland, Ohio, Jared Atha and his wife Alison, of Canute, Jenisa Penn and her husband Danny of Pittsburg, KS. A sister, Lolita Leslie and her husband Max of Alva and many nieces, nephews, great nieces and nephews other relatives and many friends. In lieu of flowers the family requests contributions be made to the American Heart Association. PDF Printable Version

J. W., son of Paul M. and Edith (Smith) Small was born on July 13, 1928, at Ashland, Ks. He passed away in Integris Baptist hospital in Oklahoma City, OK on December 22, at the age of 81 years 5 months and 9 days. He began his education... View Obituary & Service Information

The family of J.W. Small created this Life Tributes page to make it easy to share your memories.

Send flowers to the Small family.