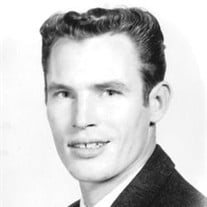 James Loren was born February 8, 1935 in Dacoma, Oklahoma to Edith (McCoy) and David Fred Zahorsky and passed away July 19, 2014 in Scottsdale, Arizona at the age of 79. He served in the United States Army and was a veteran of the Korean War and was a member of the American Legion. Jim began a career in the field of law opening his own practice in Thomas, Oklahoma shortly after graduating from the University of Oklahoma School of Law in 1963. At the time of his death he was employed by Stegall, Katz and Whitaker in Phoenix, Arizona where he was initially hired for a three or four week project in 1984. Thirty years later, Jim was still employed by the firm where over the years he built relationships and was successful providing legal assistance in real estate, probate, corporate structuring and a variety of other areas. Over the course of his career he held several civic and community leadership roles. However, inside his business like exterior was an Oklahoma farm boy with a sense of adventure. Jim lived life to the fullest and over the years he enjoyed things like cliff climbing in his jeep, boating, deep sea fishing, snow skiing and sky diving. He also liked to hunt whether it was on family land or in the mountains of Colorado. He had a natural ability to fix things and was an excellent mechanic. Jim enjoyed golf and was an avid sports fan, especially when it came to Sooner football. He also had a passion for planning and a talent for preparing menus that centered on the barbeque grill. Jim was a proud member of the OU Alumni Association and was a supporter of various charities too numerous to mention. He was preceded in death by his parents and two brothers, David Fred "Junior" Zahorsky and Roger Zahorsky. Jim is survived by his three daughters, Brenda Zahorsky of Cherokee, Mary Gumaer of Aline, Lori Coonrod and husband Larry of Enid; two sons, James David (J.D.) Zahorsky of Oklahoma City and Doug Zahorsky of Oklahoma City; five brothers, Delbert Zahorsky of Enid, Don Zahorsky of Dacoma, Darrell Zahorsky of Hutchinson, Kansas, Carroll Zahorsky of Kansas City, Missouri, and Stan Zahorsky and wife Jan of Minneapolis, Minnesota; and one sister, Marlene McLean and husband, Perry, of Overland Park, Missouri. He is also survived by six grandchildren, Thomas Knopf, Jayme Shelite, Candace Marie Coonrod, Cooper Coonrod, James Zahorsky and Tyler Zahorsky, three great grandchildren as well as co-workers that were like family. A celebration of Jim's life was held August 7, 2014 at Alexi's Grill in Phoenix, Arizona 85012. A graveside service with military honors will be held at 10:00 a.m. on August 16, 2014 at the Alva Municipal Cemetery in Alva, Oklahoma. Family and friends are invited to the Runnymede hotel, downtown Alva following the service. Memorial contributions may be directly to the University of Oklahoma School of Law scholarship program online at http://www.ou.edu/content/give/where/colleges_programs/law.html or checks can be made out to the OU Foundation (with designation and in memory of indicated in the memo line) mailed to: OU College of Law Development, 300 Timberdell Rd., Norman, OK 73019. PDF Printable Version

James Loren was born February 8, 1935 in Dacoma, Oklahoma to Edith (McCoy) and David Fred Zahorsky and passed away July 19, 2014 in Scottsdale, Arizona at the age of 79. He served in the United States Army and was a veteran of the Korean War... View Obituary & Service Information

The family of JAMES LOREN ZAHORSKY created this Life Tributes page to make it easy to share your memories.