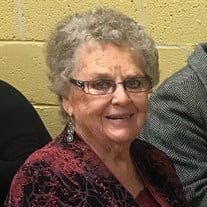 Iva Annette was born on February 8, 1938 in Alva, Ok to Theodore Rucker and Iva Grace (Maltbie) Rucker. Iva passed away at Share Medical Center on January 10, 2021 due to complications from double pneumonia. Due to her parents dying at a young age, she and her brother were lovingly raised by her aunt and uncle, Alvina (Maltbie) Talley and Paul Talley on a farm North of Amorita. Iva loved playing basketball and loved to talk about when her Amorita Cardinals won the Oklahoma State Championship. After graduating from Amorita high school, lva attended Northwestern Oklahoma State University in Alva, OK for one year. This is where she met the love of her life, Harold Gates. They were married on August 31, 1957 in Amorita, OK. After getting married, they moved to Wichita, KS where she attended Cosmetology school. After only 1 year in Wichita, they moved back to the Amorita area and bought the farm where they lived for 49 years before moving to Alva. Iva loved people and worked at Virgil's (Frey Brothers Store) for many years before being appointed Postmaster in Amorita. She retired in 2012, at which point she enjoyed spending as much time as possible with family and friends. Iva was a faithful member of the Alva Congregation of Jehovah's Witnesses. Through her study of the Bible, she looked forward to the resurrection hope mentioned at Acts 24:15. Iva was proceeded in death by her parents, her aunt and uncle who raised her, her brother, Theron Rucker, and 2 cousins, Don Talley and Ray Talley. Left to mourn are her husband, Harold, of the home; her 4 children, Tony (Patty) Gates of Amorita, Nancy (Kevin) Ensminger of Cherokee, Paula (Shawn) Darr of Alva, and Penny (Ken) Emmele of Amorita; grandchildren Kayla (Dusty) Mackey of Alva, Jordan Ensminger of Los Angeles, CA, Sadie Crusinbery of Alva, and Joseph (JC) Cruisinbery of Alva; and great grandchildren Cooper Mackey and Copen Mackey. Visitation will be Wednesday at Wharton Funeral home of Alva from 9:00 AM - 8:00 PM. Graveside services will be Thursday at 1:00 PM at the Byron Amorita cemetery. Services will be streamed live on the Wharton Funeral Chapel Facebook page and also available via FM radio for those who wish to stay in their cars. In lieu of flowers, memorials may be made to the Byron-Amorita Volunteer Fire Department or Share Medical Center Foundation Nurses Fund through the Funeral home.

Iva Annette was born on February 8, 1938 in Alva, Ok to Theodore Rucker and Iva Grace (Maltbie) Rucker. Iva passed away at Share Medical Center on January 10, 2021 due to complications from double pneumonia. Due to her parents dying at a young... View Obituary & Service Information

The family of Iva Annette Gates created this Life Tributes page to make it easy to share your memories.

Send flowers to the Gates family.