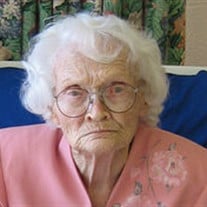 View the image gallery Irene Walker Tanner-Ewing was born January 8, 1911 in Haigler, Nebraska near her parents’ homestead in Binkleman, Nebraska. She graduated from high school in Greensburg, Kansas and came to Alva to attend Northwestern State College. She graduated from Oklahoma University and after teaching for a year returned to Alva to work at Monfort Drug. In 1941 she married Brette M. Tanner, who was in business with his father E.W. at the E.W. Tanner Co. Irene joined Brette in the family business after their marriage. Son Arthur was born in 1944 and daughter Ann joined the family in 1949. After Brette’s death, in 1979, Irene continued to operate the business until 1984 when she sold the store to JaDeanna Farris. In 1983 Irene married R.V. “Rudy” Ewing. Irene was active in the Alva community throughout her life. She was a member of Chapter “C” PEO, Eastern Star, DAR, and served as Mother Advisor for the local Rainbow Chapter for a number of years. She was active in both the First Christian Church and the First United Methodist Church. She served on the Share Library Board and was a volunteer at the Senior Citizens Center. She was preceded in death by both her husbands, Brette and Rudy; her parents, Lola F. and E.D. Walker; a son-in-law Jerry Dillon; three sisters, Gertrude, Pauline and Alma; and three brothers, Ike, Johnny and Mickey. She is survived by her son and daughter-in-law, Art and Sue Tanner of Rose Hill, Kansas; daughter, Ann Dillon of Nash, Oklahoma; four grandchildren, Tracie VanHoutan, Niki Allen, Brette Tanner, and Sarah Dillon; great grandchildren, Casey, Nik and Darby VanHoutan, Jayden Dillon, Colby and Carson Tanner. A sister, Lorna Cuvilier survives as do Rudy’s daughters, Dorian Tatum and Vickie Ewing. Two special nieces Marcie Hronoplus and Wanda Baker also survive. PDF Printable Version

The family of Irene Tanner created this Life Tributes page to make it easy to share your memories.

Send flowers to the Tanner family.