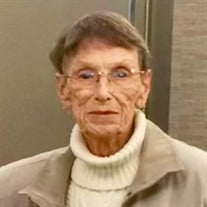 Imogene Ann (Reiman) Allen, passed away peacefully, after a brief illness, surrounded by family on March, 18. 1922 at the age of 88 years and 4 months at the St. Anthony Hospital in OKC. Imogene was born in the old Alva General Hospital where the Cherokee Strip Museum stands today, on November 18, 1933 to Herb and Esther (Parker) Reiman. Mom was born during the Dust Bowl days and experienced and lived through many historic events over her lifetime. She grew up the oldest of three children, with brother Darrell Reiman and sister Joyce Stevens rounding out the trio. Mom enjoyed a close relationship with both of them until the time of their passing. She lived her entire childhood in Alva and attended Alva Public Schools and graduated with the class of ’51. Following graduation, Imogene met her future husband after asking him to a Sadie Hawkins dance. They were married later that year at the Alva First Baptist Church on August 31, 1952. To this marriage, two sons were born. Gregory Scott Allen and David Todd Allen. After earning her emergency teaching certificate at NWOSU, she later taught 3rd grade at the same school, in Palmdale, California, that her husband Mel taught at. Imogene was a homemaker/mom during her children’s early years until the time that they started attending school. After the sudden death of her father in 1974, the family returned back to Alva from St. John, Kansas, to be closer to family. It was then that Imogene and Mel opened and operated a shoe store, Allen’s Fine Footwear, on the north side of the Alva downtown square. After the store’s closing, Mel returned to teaching and mom began her 17 year career at Wal-Mart. She started working for Wal-Mart at the original location before she moved out to the current location and helped set up the store and open the doors. These years of her life were so meaningful to her because of the lifelong friendships she made with her co-workers and the memories that were built over the years. After the passing of her husband, Mel in 1997, these women were supportive and helped her face the challenges of being independent. Although many of these women have since passed, mom still remained in contact with some of her remaining co-workers up to the time of her death and continued to tell stories about all of them. Imogene retired from Wal-Mart in 1997 and began her next journey in life. Mom was a devout Christian and passionate about everything she did. She was an avid book reader and read novels by the bagful, checking out and reading many of the same titles numerous times. She enjoyed her cooking and gardening shows on Saturday mornings and even got caught watching The Price is Right on numerous occasions. Her greatest love and source of pride was her yard and flower beds. Her favorites being her rose bushes. We never realized just how much work she spent preparing and maintaining her flowers and plants until she started volunteering her family and friends to help her take care of everything. Mom was always proud about her yard being selected Yard of the Month on two separate occasions. The first being when her husband Mel was still living and the second time she accomplished independently at the age of 80. Imogene was preceded in death by her husband Melvin Allen, parents Herb and Esther Reiman, her sister Joyce Stevens and her brother Darrell Reiman. Imogene is survived by her two sons, Gregory Scott Allen (OKC) and David Todd Allen (Alva, Ok), three nieces, Shannon Stevens (Sanford, Fl), Erin Stevens (North Zulch, TX) and Nicole Towns and husband Ric (Alva, Ok), and one nephew, Micah Reiman and wife Katy (Alva, Ok), and numerous friends. The family would like to thank the entire staff at Holders and everybody who were vital to her care during her illness the last three months and allowed her to spend the remainder of her life in her own home. Imogene was an amazing wife, mom and friend and will be missed dearly. The family asks that in lieu of flowers, that memorial contributions be made in her memory to the Alva Public Library.

Imogene Ann (Reiman) Allen, passed away peacefully, after a brief illness, surrounded by family on March, 18. 1922 at the age of 88 years and 4 months at the St. Anthony Hospital in OKC. Imogene was born in the old Alva General Hospital where... View Obituary & Service Information

The family of Imogene Allen created this Life Tributes page to make it easy to share your memories.

Imogene Ann (Reiman) Allen, passed away peacefully, after a brief...

Send flowers to the Allen family.