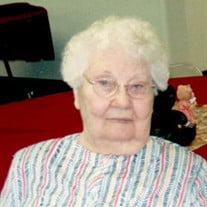 View the image gallery Ila Mae, daughter of Catherine Esther (Wanger) and Fred Moore Welty was born at Freedom, Ok. on June 3rd, 1922 and passed away at Mooreland Heritage Manor on the 26th of July, 2015 at the age of 93 yrs, 1 month and 23 days. She attended school from the Freedom School System. Ila Mae was married to Earnest Elmer, Jr. “Dick” on May 12, 1978 at the Freedom Christian Church. They lived on the Roberts Ranch for about 3 years, then moved to the Kornele Ranch northeast of Freedom where they lived until January 25, 2001 when they moved to the Mooreland Heritage Manor. Mrs. Kornele was preceded in death by her parents; and her husband. She is survived by three step-sons and their wives, Jim of Elk City, Roger and Rita of Woodward and C.R. and Janice of Mooreland; three step-grandchildren, Brian & Steve of Mooreland and Jared of Woodward. Five great-grandchildren, Brexton, Italy, Blake and wife Reney, Rylei, Olivia and Cassie, a sister, Betty and husband, Marvin Perrin of Fargo, brother-in-law, Bill Kornele of Clayton, New Mexico, & two sister-in-laws, Alice Welty of Coldwater, Kansas and Naomi Welty of Shattuck, Oklahoma. A number of nieces, nephews, other relatives and friends. PDF Printable Version

The family of Ila Mae Kornele created this Life Tributes page to make it easy to share your memories.

Send flowers to the Kornele family.