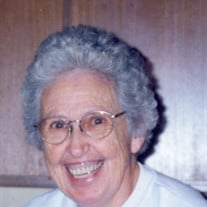 View the image gallery -- View a Video -- Helen Long Helen Louise, daughter of Maggie Elizabeth (Harris) and Elmer Thomas Smith was born on April 16, 1916 at Latham, Kansas. She passed away at the Beadles Nursing Home on the 23rd of May at the age of 93 years, 1 month and 7 days. She attended the Upper Timber Creek Rural grade school and graduated from the Latham High School. Later attending the Kansas School of Business at Wichita. Miss Smith was married to Kenneth Deinlein on February 23, 1941 in Blackwell, Oklahoma. To their marriage two children, Larry and Carolyn were born. Kenneth passed away on February 14, 1956. Following their marriage they lived in Hopeton. They both worked as Depot Agents for the Frisco Railroad; she at Hopeton and him at Dacoma. After Kenneth’s death she went to the Dacoma Depot. She worked for the Frisco for a total of 13 years. Helen was married to William Russell Long in Medford, Oklahoma on May 11, 1962 and they made their home in Alva. He passed away on November 26, 1976. She worked as a bookkeeper for the Alva Co-op and retired after 27 years with them. Mrs. Long was preceded in death by her parents, three sisters, Edith McMinn, Althea Mann and Margaret Scott and seven brothers, Merle, Clayton, Earnest, Roy, Ray, Chester and Don. Helen is survived by her son and his wife, Larry and Pamela Deinlein of Kingsland, Texas and her daughter and her husband, Carolyn and Dale Sample of Alva. Two granddaughters, Deborah Joyce and Lori Anderson; two grandsons and their wives Jeff and Ann Deinlein, Brett and Lori Sample. Two great granddaughters, Rylee Sample, Cate Deinlein, and a step great grand daughter, Sarah Stinson. A number of nieces, nephews, other relatives and friends. PDF Printable Version

The family of Helen Louise Long created this Life Tributes page to make it easy to share your memories.

Send flowers to the Long family.