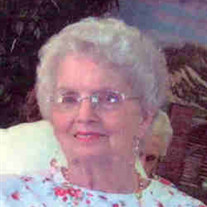 Helen May, daughter of Nettie (Campbell) and Frank Schmitt was born on September 5, 1926 on a farm northwest of Alva. She passed away at the Alva Beadles Nursing Home on the 21st of August at the age of 81 years, 11 months and 16 days. She attended the Farry School and graduated from high school with the class of 1945, and then she went to Beauty College at Chickasha, Oklahoma. Miss Schmitt was married to Homer Houston, Jr. on February 10, 1951 at Capron. To their marriage, three daughters: Homa Lea, Lesa Mae and Dorothy Jean were born. Jr. passed away on July 18, 1996. Following their marriage, they made their home in Dighton, Kansas. In April of 1959, they came to Hardtner, and she operated a beauty shop in her home for 50 years. In October of 2006 she came to Alva to make her home. Helen loved to cook, work in the yard, sew, and make matching dresses for her daughters. She hand made quilts for her children, grandchildren and other special people. Mrs. Houston was a member of the St. John’s Community Church and the Stateline American Legion Auxiliary. She was preceded in death by her parents, her parents-in-law, Homer Sr. and Nellie Houston, three sisters: Tessie Sandell, Rhoda Pearl Rosser, and Velma Snyder, a brother, Leo Schmitt and a brother-in-law, Gloyd Lyon. Helen is survived by her three daughters: Homer Masters and Jerry Darger of Kiowa, Kansas, Lesa Schoeling of Alva, and Dot and her husband Rick Tyree of Hardtner, Kansas. Seven grandchildren: Meagan Masters, Brandon Masters and Lisa Woods, Jarred Tyree, Jessica Tyree and Brent Simmons, Jordan Tyree, Maggie and Morgan Schoeling and a great grandson, Dayton James Masters. Six sisters: Goldie Lancaster, Dorothy Lyon, Katherina and her husband Maynard Arndt, Mary Schmitt, Margaret and her husband Larry Snow all of Alva, Eva Cleary of Summerville, South Carolina. A brother, Ed and his wife Alice Schmitt of Medford, a brother-in-law, Donald “Buck” Houston of Emporia, Kansas. A number of nieces, nephews, other relatives and friends. Contributions may be made in her memory to St. John’s Community Church or to M.D. Associates in Honor of Dalton Black. PDF Printable Version

Helen May, daughter of Nettie (Campbell) and Frank Schmitt was born on September 5, 1926 on a farm northwest of Alva. She passed away at the Alva Beadles Nursing Home on the 21st of August at the age of 81 years, 11 months and 16 days. She... View Obituary & Service Information

The family of Helen Houston created this Life Tributes page to make it easy to share your memories.

Helen May, daughter of Nettie (Campbell) and Frank Schmitt was...

Send flowers to the Houston family.