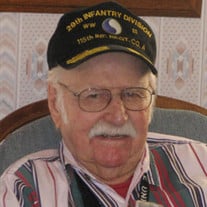 Harold Richard, son of Goldie Oneta (White) and Richard Webster Fox was born on a farm west of Lambert on March 25, 1924. He passed away suddenly in Cheyenne, Wyoming at the Cheyenne Regional Medical Center on the 7th of August at the age of 85 years, 4 months and 13 days. He attended Cracker Box Rural Grade School and graduated from the Lambert High School with the class of 1942. Then he joined the United States Army serving in the European Theater and received a Purple Heart on July 19, 1944 at the Battle of St. Lo, France. On April 12, 1945 in Cherokee he was married to Norweta LaBerta Lehl by the Reverend W.A. Keller. To their marriage three children were born, Zoneta Jane, Richard George (Rick) and Randy Joe. Mrs. Fox passed away on October 12, 1997. Following their marriage they lived on a farm two miles south and ¾ miles east of Ashley. They farmed and raised cattle. Harold worked for Alfalfa County as a heavy equipment operator and retired after thirty years; and also drove the Lambert School bus for three years. Harold was a member of the Cherokee Friends Church, and a loyal member of the Alva Elks Lodge. Mr. Fox was preceded in death by his parents and a sister, Leora Pelter. Harold is survived by a daughter and her husband, Zoneta and Conrad Solf of Rose Hill, Kansas; two sons and their wives, Rick and Peggy, and Randy and Jimmy, all of Alva; Six grandchildren and their spouses, Shannon Solf, and Katie of Derby, Kansas, Sharrie Solf of Rose Hill; Amber (Fox) Bosch and Henk; Travis Fox and Lisa, of Edmond, OK, Skylee Fox, and Joelle of Alva and Norweta Fox, of Cheyenne, WY. Six great grandchildren, Cristen Bosch, Logan Buckley, Brantlee and Rosalyn Fox all of Alva, Tristan Solf of Derby, KS and Asher James Fox of Edmond and three step-great grandchildren, Kris and Jazmine Barlow and Kolbi Roach, all of Derby. He is also survived by two nieces and their spouses. Verna and Calvin Graybill of Alva and Nita and Travis Cox of Cherokee, Oklahoma , a very special cousin, Eva Mae Stout of Lambert, and other relatives and friends, along with a host of Ranger fans. PDF Printable Version

Harold Richard, son of Goldie Oneta (White) and Richard Webster Fox was born on a farm west of Lambert on March 25, 1924. He passed away suddenly in Cheyenne, Wyoming at the Cheyenne Regional Medical Center on the 7th of August at the age of... View Obituary & Service Information

The family of Harold Fox created this Life Tributes page to make it easy to share your memories.

Send flowers to the family.