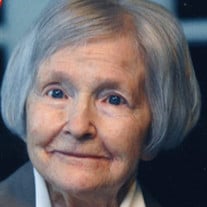 Grace Carol was born August 3, 1926, in Alva, Oklahoma to Howard L. and Lucie K. (Floyd) Nighswonger and was raised on the family farm northwest of Alva. Elementary school was Greenleaf School, a one room country schoolhouse, where she skipped 3rd grade because she was the only one in that class. She moved into town and stayed with her Aunt Grace and Uncle Ed Van Anterp so she could attend high school. After graduation she attended Northwestern Oklahoma State University. At a sorority dance she met William (Bill) Whitson, who was stationed in Alva with the Army Air Corp, since this was during World War II. When he was transferred to the base in El Reno Grace enrolled at Oklahoma State University to be closer to him. She finished her sophomore year there, after Bill was shipped overseas. When the war ended, they were married July 21, 1945, at the home of her Aunt Grace and Uncle Ed. They left Oklahoma to live in Arlington, Virginia where Bill was from. After he got an accounting degree on the GI Bill, Grace and Bill moved to Alexandria, Virginia where she resided until 2006. Four children were born to them, Kathryn Floyd, Rebecca Anne, Richard Layton, and William Stuart. Bill died in March of 1980. In 2000, Grace became an invalid due to chemical poisoning and in 2006 she moved back to Alva to be closer to her family there. She died at her home in Alva April 3, 2013 at the age of 86 years and 8 months. Grace was an avid reader, loved to do crossword puzzles, and could be packed and ready to go somewhere in 5 minutes. She went to Europe several times. She loved anything chocolate, enjoyed knitting, crocheting and sewing. She loved making intricate felt Christmas ornaments to give everyone at Christmas. Family was very important. She attended Washington Street United Methodist Church in Alexandria and was very active in the Hal Fisher Sunday School Class. She is survived by her children, Kathryn Frech and husband Jerry of Woodward, Oklahoma, Rebecca Glass of Woodford, Virginia, Richard Whitson and wife Margie of Salt Lake City Utah, and Stuart Whitson and wife Temple of Alexandria, Virginia; her brother, Paul Nighswonger and his wife Elaine of Alva, and a special family friend Rich Lee of Woodford, Virginia. Her grandchildren are Heidi Vanlandingham and husband David of Yukon, Oklahoma, Susan Sims and husband Wesley of Woodward, Oklahoma, Kathleen Berry and husband Michael of Choctaw, Oklahoma, Rachel Creamer and husband Arrick of Tunnel Hill Georgia, Ian Whitson and Elizabeth Vanlandingham of Alexandria, Virginia. Her twelve great grandchildren are Connor and Rylan Vanlandingham, Michael and Kyle Sims, Dallas, Syler, Boston and Gracen Berry, and McKai, Nathaniel, Liora and Aliya Creamer, plus several nieces, nephews, other relatives and friends. She will be truly missed. PDF Printable Version

Grace Carol was born August 3, 1926, in Alva, Oklahoma to Howard L. and Lucie K. (Floyd) Nighswonger and was raised on the family farm northwest of Alva. Elementary school was Greenleaf School, a one room country schoolhouse, where she skipped... View Obituary & Service Information

The family of Grace Whitson created this Life Tributes page to make it easy to share your memories.

Send flowers to the Whitson family.