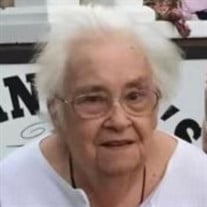 Grace Rosa Belle was born on June 22, 1936 to Kaiser L. and Sara (Wallace) Hatch in Kingman, Arizona. Her family moved to Cherokee Oklahoma in January of 1942 where they made their home. Grace graduated from Cherokee High School and then pursued a career in Nursing. With her education and experience, she spent all her working life helping residents in the nursing home have a fulfilled life. She retired from the Housekeeping Department at Cherokee Manor in 2001. She married and divorced twice before she met the man whom she would love for the rest of her life, Carroll Brining. They wed on November 24, 1978. From there, Walking Tall and Morning Dove became their alter egos and everywhere they went they had lots of friends and family in CB land. Grace and Carroll went camping and fishing several times a year until he died in 1996. She loved to quilt, do puzzles, play chess and other games on her Kindle. Grace enjoyed cake decorating and made several of her children’s wedding cakes. She collected salt/pepper shakers and anything Garfield the Cat. Her family was her life. She was preceded in death by Carroll, her parents, an infant son (Robert Dean), and a great grandson (Caleb); three brothers (Chester, Kenneth, John), one sister (Jeanette), two sister-in-laws (Marilyn and Becky) and one brother-in-law (Raymond). Grace is survived by her four children; Wayne and Barbara Rieger of Anderson Indiana, Donna and Roger Wixom of Fairmont Oklahoma, Angie Raida of Cherokee Oklahoma, and Buddy Raida of Stigler Oklahoma. Her grandchildren; Kimberly and John Strong, Staci Rieger, Crystal and Alberto Velazquez, Mary and Glenn Varner, Sammuel Rieger, Clayton and Valerie Weaver, Sara and Lenny Reed, Leslie and Brian Collins, Tyler and Amanda Thompson Wixom, Emma Wixom, Shala Shaw, Shon Shaw, Nickolas Shaw, Makala and Kevin Smith, Dalton and Madison Tatum, Zoe Raida, and Remy Raida. Her great grandchildren; Joseph Strong, Cheyenne and Kaelijiah Rieger; Amber, Emily, Jasmin, Olivia, and Sophia Valazquez, Kindra and Korey Varner, Kamdon and Kynleigh Reed, Kendal and Kade Collins, Rae Wixom; Ally, Bentley, and Serenity Jehner, Ryan Smith, Marlan Shaw, Michelle and Bella Tatum, and Legend Bidwell and Kimberlyn Ontman. Grace is also survived by one Sister-In-Law, Doris Hatch, and an honorary son, Mike Bell; and many cousins, nieces, nephews, and people she called family.

Grace Rosa Belle was born on June 22, 1936 to Kaiser L. and Sara (Wallace) Hatch in Kingman, Arizona. Her family moved to Cherokee Oklahoma in January of 1942 where they made their home. Grace graduated from Cherokee High School and then pursued... View Obituary & Service Information

The family of Grace R Brining created this Life Tributes page to make it easy to share your memories.

Send flowers to the Brining family.