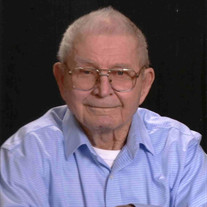 Glenn Ray was born August 3, 1931 on his parent’s farm at Fairmont, Oklahoma. He was the fourth son of seven brothers to his parents, Erhardt and Pauline (Frickenschmidt) Schoeling. He was baptized on September 6, 1931 and confirmed on April 14, 1946 at Zion Lutheran Church in Fairmont. Glenn attended the Lutheran School at Fairmont for 8 years and went on to attend Garber High School. He entered the Army after high school during the Korean War where he was stationed in Germany. He served in the Army for 2 ½ years and was honorably discharged in April of 1952. He worked on the VanDyke Ranch at Springer, New Mexico after his service in the Army. He met his wife, Louise Lohmann at Walther League (church youth group) before he left to work at VanDyke Ranch. He returned to live in Alva after working on the ranch in New Mexico to marry Louise in November 1954. They moved to Louise’s parent’s family farm southeast of Alva where they made their home. Glenn and Louise are blessed with four children: Gary, Dennis, Glenda and Sharon. Glenn was a faithful member of the Zion Lutheran Church of Alva where he served as a trustee and on the board of education for several years. He served on the Woods County Fair board and was an associate board member of the Dacoma Farmers Coop. Glenn and Louise raised Charolais cattle and farmed. Glenn was an active member of the American International Charolais Cattle Association for over 50 years. Besides his parents, Glenn was preceded in death by his wife Louise of 64 years; four brothers: Keith, Kenneth, Virgil and Edgar. He is survived by his children, Gary (Beth) Schoeling of Alva; Dennis Schoeling of Alva; Glenda (Eric) Armintrout of Peculiar, MO; Sharon (Kevin) Brewer of Watonga, OK. Five grandchildren, Maggie Schoeling of Grapevine, TX, Morgan (Brandon) Stupka of McPherson, KS; Kyle Schoeling of Alva, Dalton (Sarah) Brewer of Fay, OK; Shelby (Mark) Cameron of Dover, OK and five great-grandkids, Drace Maxon Stupka, Demory May Stupka, Colson Glenn Brewer, Dre Macklyn Stupka and Hayes Robert Brewer; two brothers, Richard of Douglas, OK and Larry of Fairmont, OK, many nieces, nephews, family and friends. In lieu of flowers memorial contributions can be made to Zion Lutheran Church or Faith Hospice or Champion Home and Companion Care through Wharton Funeral Chapel.

Glenn Ray was born August 3, 1931 on his parent&#8217;s farm at Fairmont, Oklahoma. He was the fourth son of seven brothers to his parents, Erhardt and Pauline (Frickenschmidt) Schoeling. He was baptized on September 6, 1931 and confirmed on... View Obituary & Service Information

The family of Glenn Ray Schoeling created this Life Tributes page to make it easy to share your memories.

Send flowers to the Schoeling family.