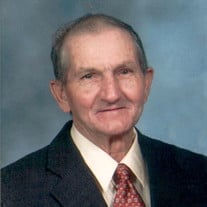 Glenn Alfred, son of Letha (Wolf) and Charley Tilford Schlarb, was born on July 27, 1936 in Mooreland, Oklahoma. He was one of eight kids, Tillie Pearl, Anna May, Billie, Lorene, Mary Lou, Stanley and Jimmy. He passed away at Beadles Nursing Home on April 18, 2017 at the age of 80 years, 8 months and 25 days. Glenn attended a country school in the Chester Oklahoma area. In February of 54 he enlisted in the Air Force until October 1956 returning to Alva Oklahoma and had a son, Glenn Schlarb Jr. He was married to Elizabeth ( Susie) Ann Copenhaver on September 11, 1958 in Woodward, OK. To this union two sons were born, Steve and Kelly. Glenn worked at Shalloup packing company, as a carpenter for Robert R. Brown, a bricklayer, and later worked for Junior Rogers as a welder. In 1960 he opened Glenn Schlarb welding and ran it until was handed over to his son Kelly. His hobbies, included performing magic shows for the community children, seeing the smiles and wonderment on their faces warmed his heart. He took pride in his metal artwork and enjoyed building porch swings that can still be seen all over the Alva area. He loved caring for his pet cattle especially his Brahma bulls, as well as the birds used his magic show. Glenn is survived by his wife, Susie, his sons, Glenn Jr., Steve, Kelly and wife Vicki. His four grandchildren Jeremiah and Alyssa Schlarb, Brandi And David Peace, Megan and Nico Lopez and Brianna Schlarb and Chance Powell. Plus his 10 great-grandchildren Madyson, Alexa, Taytum, Aiden, Trace, Gage, Che, Joey, Morgan and Vada, and other nieces, nephews and other relatives and friends. Memorial contributions may be made to the Alva Elementary School Activity Fund through Wharton funeral Chapel.

Glenn Alfred, son of Letha (Wolf) and Charley Tilford Schlarb, was born on July 27, 1936 in Mooreland, Oklahoma. He was one of eight kids, Tillie Pearl, Anna May, Billie, Lorene, Mary Lou, Stanley and Jimmy. He passed away at Beadles Nursing... View Obituary & Service Information

The family of Glenn Alfred Schlarb created this Life Tributes page to make it easy to share your memories.

Send flowers to the Schlarb family.