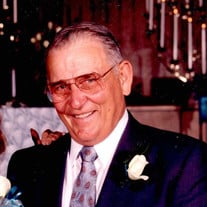 Born August 21, 1937 in Great Bend, KS to H.E. “Mac” Michaelis and Bernice (Lipprand), Gil Michaelis passed away July 12, 2017 at the age of 79. He now joins his wife, Roberta Joan Michaelis who passed away on September 4, 2004. He is survived by Dale and Kathye Michaelis of Oklahoma City, OK, Mike and Dana Michaelis of Argyle, TX, B.J. and Sheila Michaelis of Parker, CO, and Patricia Michaelis from Tulsa, OK. Eleven grandchildren Misty, Alan, Adrienne, Derek, Austin, Brandon, Michaela, Devin, Jared, Baxter, and Garret. Six great-grandchildren, Beckett, Reese, Declan, Telesa, Raven, and Jaden. Gilbert grew up in Russell and Great Bend, Kansas graduating from Great Bend Senior High School and then entering the United States Air Force. He married Roberta Joan (Bethel), his high school sweetheart on June 16, 1956 and they departed for his first duty station in Madison, Wisconsin. The family returned to Great Bend in 1960 after he separated from active duty where Gil entered into private business as a gas station owner. In 1966, the family moved to Guymon, OK where he worked in the oil business. Gil transitioned to the insurance business March 1967 in Guymon prior to moving to Alva in 1968 where he opened Mid Continent Insurance Agency. He was proud to have completed 50 years in the insurance business this past March and was recognized by the industry for his excellence in Insurance knowledge and customer loyalty many times throughout his career. He was a valued member of the Masonic Lodge and held multiple positions during his involvement with the organization. Gil was a friend to many in northern Oklahoma who recognized him for his candor, professionalism and genuine concern for their wellbeing. In addition to work with the Masons and serving on several boards, he gave back to the community as an umpire for junior high, high school, and collegiate level sports. He was extremely supportive of his athletes. This twenty-year avocation gave him great joy as he not only oversaw the game, but was able to watch young athletes develop and hone their skills. Gil was an avid aviator and seized every opportunity he could to "make holes in the clouds". His passion for flying was only exceeded by the love he had for his family, friends and community. The companionship of Barbara Ann Bouziden, Bob Baker, Greg Baker, Debbie Ackerman, fellow Masons, fellow aviators and other community friends provided great joy since his wife's passing. Gil was extremely proud of his children. He and Roberta raised a family of achievers with individual independence and sound family values. These children, grandchildren and great grandchildren are the legacy they achieved together. The family requests in lieu of flowers, a donation be made to the Northwestern OSU Foundation Roberta Michaelis Memorial Scholarship at https://my.nwfoundation.com. Or the Alva Masonic Lodge.

The family of Gilbert Michaelis created this Life Tributes page to make it easy to share your memories.

Send flowers to the Michaelis family.