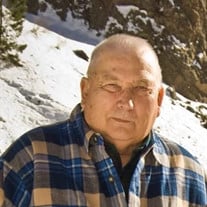 Gerald �Garry� Dean Nelson, son of Muriel (Butler) and Everett Dean Nelson was born January 12, 1939 in Woods County, Oklahoma. He passed away peacefully at his home in Sun City West, Arizona on the 5th day of February at the age of 78 years and 24 days. He started school in Hopeton, Oklahoma and finished in Alva, Oklahoma graduating from Alva High School with the class of 1957. He attended and studied engineering at Northwestern Oklahoma State University in Alva where he was an active member of the Army National Guard. This is also where he met his late wife Sue Jane (Nickell). They married on June 2, 1961 at Alva First Christian Church. To their marriage three children Jim, Kristy and Kathy were born. Following their marriage they made their home in Yale, Oklahoma where he worked in the oil industry for several years while co-managing his family�s farmland in Hopeton, Oklahoma. In 1980 he made a full return to his farming roots and purchased a farm southwest of Texhoma, Oklahoma in Sherman County, Texas. In 2014 he retired and spent his time between Creede, Colorado and Sun City West, Arizona. He was preceded in death by his father on October 23, 1973 and his mother on January 12, 1995, his brother Mack D. Nelson April 29, 1994 and wife Sue Jane on July 7, 2011. He is survived by his three children, Jim and LuAnn Nelson of Liberal, Kansas, Kristy and Troy Irrer of Cumming, Georgia and Kathy Nelson Maynard of Nolensville, Tennessee; five grandchildren, Hannah and Halle Maynard, Morgan and Brooke Nelson and Paige Irrer; sister-in-law and her husband, Lynda and Terry Bixler of Waynoka, Oklahoma and sister-in-law Karen Nickell of Oklahoma City, Oklahoma; sister-in-law Barbara Nelson of Alva, Oklahoma; several nieces, nephews and other relatives and friends. Contributions may be made in his memory to the First United Methodist Church of Texhoma, Oklahoma or to the First Christian Church of Alva, Oklahoma.

Gerald &#65533;Garry&#65533; Dean Nelson, son of Muriel (Butler) and Everett Dean Nelson was born January 12, 1939 in Woods County, Oklahoma. He passed away peacefully at his home in Sun City West, Arizona on the 5th day of February at the age... View Obituary & Service Information

The family of Gerald " Garry" Dean Nelson created this Life Tributes page to make it easy to share your memories.

Send flowers to the Nelson family.