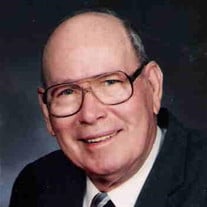 George Eugene, son of Lillie Mae (Howard) and Willard Winn Chase was born June 13, 1922 at Little in Harper County, Oklahoma. He passed away at the Alva Share Convalescent Center on the 31st of August at the age of 97 years, 2 months, and 18 days. George attended Selman school graduating in 1942. He attended American Business College in Wichita, KS during 1942-43. He also completed correspondence in accounting through LaSalle University. On December 25, 1942, George married Evelyn Stout at her parents' house in Tangier. To their marriage to children, Carol Lynn and Larry were born. George entered the US Army in January 1945 serving in the Philippine Islands. He received an honorable discharge on October 28, 1946. George was engaged in farming near Selman, OK from 1946 to 1957 and active in Farm Bureau. After moving to Alva in May, 1957, he was employed by the Farmers' Cooperative serving as Office Manager from 1958-1970. He was employed by Alva State Bank in February 2, 1970 as Comptroller. In August 1972, he was promoted to Cashier and in March 1976, promoted to Vice President and Cashier. From 1978 to retirement in 1984, he served as Senior Vice President. After retirement, the couple spent the winter months in Mercedes, TX from 1985-2007. From there they took trips in the US as well as Mexico, and cruised to Alaska. George was a member of the VFW of Alva. In younger days he served as deacon, Sunday School teacher and youth group leader at Selman Christian Church. George enjoyed fishing, boating, sports, especially football, basketball, baseball and golf, (but would watch almost any sporting event on TV, gardening, and wood working. George was preceded in death by his parents, wife, his brother, one sister, six brothers in law, and four sisters in law, and two nephews. George is survived by a daughter and her husband, Carol and Robert Rogers of Stillwater; a son Larry of Alva; and a daughter of choice, Kay (Thomason) Schenk of Wellington, KS; six grandchildren and their spouses, Jeremy and Shelley Allison of Edmond; Christopher and Mary Jane Allison of Yukon; Shelly (Chase) Dautreil of Enid, Christopher Lynn and Sheree Tisdale of St. Martinsville, LA; Hilary Rogers of Oceanside, CA and Nathan Rogers of Broomfield, CO; seventeen great grandchildren, Cody, Zak, Calysta, Brittany, Logan, Jasmine, Rowan, Chrislynn, Alexus, Nicholas, Carter, Connor, Mackenzie, Colin, Grayson, Georgianna, Jorian; and five great-great grandchildren Emily, Haley, Keegan, Korbin, and Kolton; one sister in law, 16 nieces and nephews, and other relatives and friends. Contributions can be made in his memory to Oklahoma Medical Research (OMRF) for kidney research, local VFW or Alva Senior Center.

George Eugene, son of Lillie Mae (Howard) and Willard Winn Chase was born June 13, 1922 at Little in Harper County, Oklahoma. He passed away at the Alva Share Convalescent Center on the 31st of August at the age of 97 years, 2 months, and 18... View Obituary & Service Information

The family of George E. Chase created this Life Tributes page to make it easy to share your memories.

Send flowers to the Chase family.