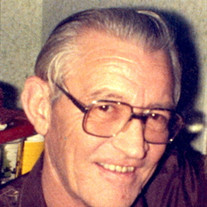 Garol Dean, son of Ruth Irene (Jones) and Benjamin Franklin Davison was born on November 19, 1932 on the family farm, near Tegarden Oklahoma. He passed away in Alva, Ok on the 4th of December at the age of 82 years and 16 days. He attended the Farry School System and graduated from High School with the class of 1948. He and a good friend Max Benningfield enlisted in the U.S. Army on November 18, 1952 serving in Germany and then France during the Korean War. He was honorably discharged on November 1, 1955. He then enrolled in NWOSU and graduated with a Bachelor of Science teaching degree. While attending college he worked for Thilsted Electric in Alva, becoming a partner and later buying out the partnership, naming it Davison Electric. He was a contractor in Okla, Colorado & Texas. In September of 1956, he met and married, the love of his life, Jewel Elaine Bullard. To their union three daughters, Deana, Julie & Shelley were born. He attended the Alva First Christian Church and a member of the Elks and Moose Lodges. Dean was preceded in death by his parents, Frank on October 24, 1990, his mother Ruth on June 28, 2010, a Grandson, Elliot Cole Burton on January 21, 1995, two brothers, Ramon Eugene on December 18, 1932 and Owen Franklin on October 26, 2013. Dean is survived by his three daughters, Deana Dian and husband Gert Broekhuizen of Enid, Ok, Julie Ann Helm and significant other John Shepherd, of Alva, Shelley Machell and husband Mark Reed of Dacoma, Ok. Granddaughters, DesiRae D’Lain Helm Wiersig and husband Kurtis, Erica Dian Kraft and husband Bobby Mafenda Sue Eslinger, Auana Leah Qualls and Valanie Manie Schmidt. Great – grandchildren Gretchen Elyce Kraft, Cole Adler Wiersig, Reichen Elliot Kraft and Hagan Asher Wiersig Jan Eslinger, Avery Qualls, Samara and Ari Schmidt, a sister and her husband, Mary Lou and Max Murrow, of Bluff City, KS. and two brothers, Bob & Jo, Jim and Marilyn all of Alva. A number of nieces, nephews and other relatives & friends. PDF Printable Version

Garol Dean, son of Ruth Irene (Jones) and Benjamin Franklin Davison was born on November 19, 1932 on the family farm, near Tegarden Oklahoma. He passed away in Alva, Ok on the 4th of December at the age of 82 years and 16 days. He attended... View Obituary & Service Information

The family of Garol Dean Davison created this Life Tributes page to make it easy to share your memories.