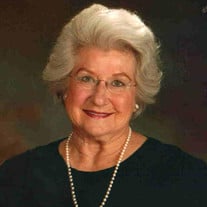 Fran's life and times Fran Brunsteter, artist, teacher, entrepreneur and so many other things, passed away peaceably on Wednesday, April 20th, 2016. Frances Ellen McCauley Brunsteter was born to Worth Byrd and Elizabeth Roberts McCauley on June 8, 1929 in Oklahoma City, joining sister, Jane, in the family. Fran spent her early years in OKC which included attending Classen High School through her junior year. In June of 1946, shortly after WWII ended, Fran, Jane and their mother sailed to Europe to join Worth in Munich where he was serving as Chief Attorney involved in the U.S. government's occupation of Germany for the purpose of reestablishing the country's military court system and based in Nuremberg. This occurred two years after Lt.Col. McCauley had landed on Utah Beach in Normandy on D-Day. Fran enrolled in and graduated from the American High School in Munich and during free time experienced skiing the Bavarian Alps and doing a good bit of hunting wild game, taking many "bucks" of various species. In 1947, Fran's parents immersed her in Paris for attending Alliance Francaise, learning the French language and preparing for studying art at the Sorbonne. Her time in Paris was brief, however, as a result of civil strife underway and she returned to Munich but her study of art proceeded as did her study of French until she returned to Oklahoma in the fall of 1948. Fran met Richard Earl ("Dick") Brunsteter at the University of Oklahoma where Fran was in the first of several generations in the family to follow who joined Pi Beta Phi. They married on November 24, 1950. After college, they settled in Alva, Oklahoma which became their permanent home, first on Murray Drive and later on Lake Drive. While raising a growing family, Fran attended Northwest Oklahoma State University and obtained a Master's degree followed by teaching English and Art at Alva High School for a number of years. After retiring from her faculty position, she opened "The Frame" in Alva and conducted a successful original art framing business into the early years of the current millennium. She was passionate in her support of the Alva Mural Society in bringing many artists and murals to the community as well as her frequent involvement in the annual Nescatunga Arts Festival. Fran was an active member of PEO, Chapter AL, sang in the choir at First Presbyterian Church where she served as Deacon and Elder at various times, and often joined her friends' "Walkie Talkie" walking group. She welcomed family and many guests (often large gatherings) into their home over the years. Dick passed away in December, 2006 and Fran continued living in Alva until 2011 at which time she moved to Brookdale Assisted Living in Oklahoma City in order to be more centrally located to her children and their families. Fran's sister, Jane, of Bristow, Oklahoma, passed away in June, 2015. Fran is survived by her five children and their families, Elizabeth (Steve) Parkhurst of Alva, Leslie (Roger) Williams of Shawnee, Kansas, William Worth "Dub" (Betsy) Brunsteter of Oklahoma City, Leigh Ann (Roger) Gaddis of Ada, and Kelly (Anthony) Misuraca of Edmond. She was, is, and will always be "Mam-ma" to 13 grandchildren and 10 great-grandchildren. Memorial contributions may be made in her memory to The Alva Mural Society or the First Presbyterian Church.

Fran's life and times Fran Brunsteter, artist, teacher, entrepreneur and so many other things, passed away peaceably on Wednesday, April 20th, 2016. Frances Ellen McCauley Brunsteter was born to Worth Byrd and Elizabeth Roberts McCauley on June... View Obituary & Service Information

The family of Frances Brunsteter created this Life Tributes page to make it easy to share your memories.

Send flowers to the Brunsteter family.