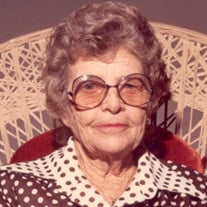 Florence Christena, daughter of Nora Evelyn (Woodard) and Chris M. Knabe was born at the home of her grandparents, Alphense and Lizzie Woodard about fifteen miles northwest of Freedom on November 24, 1908. She passed away at the Alva Share Medical Center on the 8th of February at the age of 100 years, 2 months and 12 days. She grew up on a farm her mother homesteaded near old Lookout and attended the Enterprise Rural Grade School district #107. As a child she remembers living in a one room dugout until she was twelve. Several times the family went to eastern Oklahoma in a covered wagon where they lived in the wagon and a tent all winter picking wild pecans. When she was twelve she started working away from home helping with children and chores for different families. In the spring of 1926 she went to work for Mr. and Mrs. Fred Wagner as Mrs. Wagner was an invalid. During the harvest of 1927 she worked in a restaurant in Hardtner, Kansas and later went to Wichita working as a mother’s helper. In the spring of 1928 she worked for a family named Bush. He was railroad foreman and was transferred to Springfield, Colorado and she went with them. Miss Knabe was married to John Wagner on September 13, 1928 at Two Butte, Colorado. To their marriage seven children, Faith Maxine, Darlene, Buckley, Daniel Lee, Clint, David and Dewayne were born. Following their marriage they farmed with her brother, Richard (Dick) for several years but it was not very successful and they moved on west to the Las Animas area working on farms and ranches during the drought years. They went to Syracuse, Kansas and farmed for a year. In 1935 they came back to the Wagner farm to take care of John’s parents. She then raised turkeys, about 800 per year, sometimes more or less. In the spring Florence had surgery and after an illness all summer she and the two boys left the farm and lived with her son Buckley at Bryon, Oklahoma. That fall they started a small café there until 1955 when they divorced. She and her three youngest boys went to California where Clint and Barbara lived they spent the summer there and in Colorado. In January of 1956 she returned to Freedom where the boys went to school. Later they went to Coldwater working for Johnny Kettel at the laundry. In September of 1956 she purchased the Elkhorn Service Station from Paul Clemence which they operated until they completed school. All seven of her children graduated from the Freedom High School, the last in 1962. In 1962 she closed the station and went to Fresno, California for three years and in September of 1965 returned to her home in Elkhorn to care for her mother for the next twelve years, three of which she lived in Alva taking care of John Schroeder after his death returned to her home. In 1978 she moved to Freedom and after he mother’s death she continued to care for elderly people as long as her health permitted. In 2000 she was honored as one of the Ageless Heroes by Blue Cross and Blue Shield of Oklahoma. In April of 1942 she was baptized at the Apostolic Faith Church at Elkhorn until it closed then the Freedom United Methodist Church. Mrs Wagner was preceded in death by her sons, Daniel Lee, Clint and his wife Carol and a daughter, Darlene Larcade, a grandson, Randy Gassett, a daughter-in-law, Laquita, her parents, two infant sisters, Alice and June; four brothers, Richard (Dick), Claude, Frank, Harold and Roland. Florence is survived by her daughter, Faith Maxine Gassett of Freedom, three sons and their wives, Buckley of Bloomfield, New Mexico, David and Shirley of Freedom, Dewayne and Nancy of Big Spring, Texas a son-in-law, Gene Larcade of Belle Plaine, Kansas. A number of grandchildren and great grandchildren; a sister, Ruby Wheeler of Watonga; a brother and his wife, Oliver and Elsie Knabe of Woodward; a number of nieces, nephews, other relatives and friends. PDF Printable Version

Florence Christena, daughter of Nora Evelyn (Woodard) and Chris M. Knabe was born at the home of her grandparents, Alphense and Lizzie Woodard about fifteen miles northwest of Freedom on November 24, 1908. She passed away at the Alva Share... View Obituary & Service Information

The family of Florence Christena Wagner created this Life Tributes page to make it easy to share your memories.

Send flowers to the Wagner family.